It was a beautiful day in San Francisco, so I headed down to Crissy Field to see the rally for Darfur. 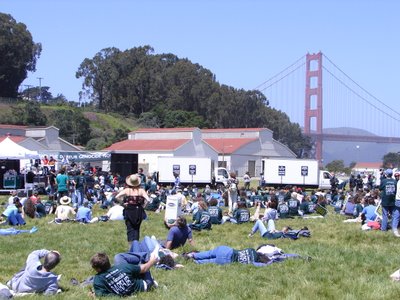 I was there a bit early, so the crowd was probably eventually much larger.

It was odd to see a rally in San Francisco without insano left-wing signs ranting against Bush or for communism or some other silly idea. 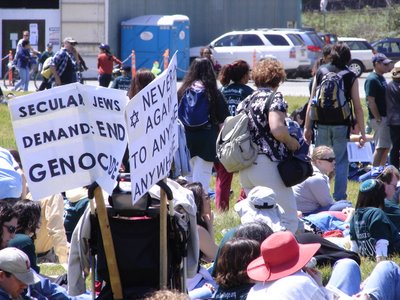 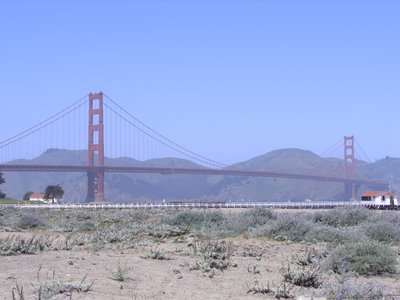 Genocide sucks, but the "international community" is never going to do anything about it as long as the international community is represented by an incompetent, corrupt, and toothless U.N. Remember what the U.N. did in Cambodia? And Rwanda? And Kosovo? And Kurdistan? Well, that's about what you can expect them to do in Darfur.

Want to end genocide? Throw cowards like France and corrupt self-dealers like Russia off of the U.N. Security Council.
By W.C. Varones - April 30, 2006 No comments:

Barbara Boxer: going the extra eighth of a mile

Gas prices have gone above $3 a gallon again, and that means it's time for another round of congressional finger-pointing.

"Since George Bush and Dick Cheney took over as president and vice president, gas prices have doubled!" charged Sen. Barbara Boxer (D-Calif.), standing at an Exxon station on Capitol Hill where regular unleaded hit $3.10. "They are too cozy with the oil industry."

She then hopped in a waiting Chrysler LHS (18 mpg) -- even though her Senate office was only a block away.

The power of the World Wide Web put to use at last!

If Claire Swires and others that have enjoyed their own 15 minutes of fame in recent years have taught us anything, it's that the internet is a powerful means of rapidly disseminating information around the globe. To paraphrase an out of touch member of the British judiciary, this girl was either up for it in the first place, or plain old stupid. Come on folks, Save Ferris!

Cop teaching gun safety to children shoots self in foot

It's all over for the unknown speculator

Bill Fleckenstein on the bursting of the housing bubble:

A recent story in the Wall Street Journal, "Hot Homes Get Cold" offered lots of its useful vignettes that serve as a microcosm of manic markets -- starting with the bravado-cum-denial displayed by a medical-equipment salesman in Stuart, Fla.

Concerned about his real-estate investment apparently going sour, he can't afford to reduce the price to what homes now sell for in his neighborhood -- which is about $100,000 less than he's asking. Says the salesman: "If I got in a jam, I would have to drop the price, but I am not at that point." His game plan: Rent the house, so as not to "lose my shirt."

That's the mentality often seen in manic markets -- the belief that you can't possibly lose, and, when the price goes against you, you don't have to deal with it, because it will come back. This fellow (and millions more like him) is going to find out that his belief is a mistaken one, in the same way that folks did when the stock bubble burst.

We are a nation of burger-flippers turned condo-flippers. People are about to learn that they were better off doing the former.
By W.C. Varones - April 24, 2006 No comments:

On the other hand...

Remember how indignant the New York Times was over the Plame leak and Karl Rove?

Well, when a Democrat leaks classified national security information to damage a Republican administration, it's not really such a big deal. She's such a nice girl, always plays by the rules, must have been forced into this position, etc., etc., etc.
By W.C. Varones - April 23, 2006 No comments:

A leak? It must be Scooter Libby

What does Scooter Libby have to do with Mary McCarthy?

I don't know, but this editor thinks they are connected: 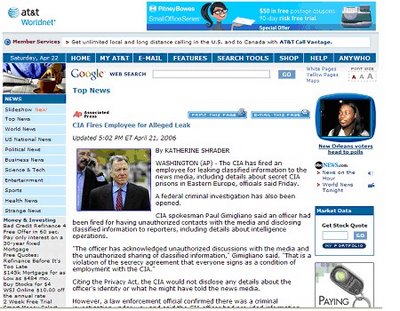 I know McCarthy is a leftist, an ally of Sandy Burglar and Lyin' Joe Wilson, and a Kerry donor, but if that's her picture she is one ugly, Scooter-Libby-looking woman.

I know very little about George Allen, other than that he's often at the top of polls for the Republican presidential nomination.

Mr. Allen says he has "a libertarian sense." He describes himself as more in sync with Thomas Jefferson and Ronald Reagan than with George Bush. "I'm one who dislikes limits. I don't like restrictions. I like freedom. I like liberty. Unless you're harming someone else, you leave people free."

France on smoking in bars: we surrender!

France on pollution: we surrender!

France on deregulating flea markets: we surrender!
By W.C. Varones - April 21, 2006 No comments:

How's our favorite organ of the elitist left doing?

Gold on the run

It's too bad there wasn't a blog that recommended buying gold when it was under $500. Readers could have made 25% in a few months.

Mark Steyn on the wisdom of burying our heads in the sand about Islamists with nukes:

You know what's great fun to do if you're on, say, a flight from Chicago to New York and you're getting a little bored? Why not play being President Ahmadinejad? Stand up and yell in a loud voice, "I've got a bomb!" Next thing you know the air marshal will be telling people, "It's OK, folks. Nothing to worry about. He hasn't got a bomb." And then the second marshal would say, "And even if he did have a bomb it's highly unlikely he'd ever use it." And then you threaten to kill the two Jews in row 12 and the stewardess says, "Relax, everyone. That's just a harmless rhetorical flourish." And then a group of passengers in rows 4 to 7 point out, "Yes, but it's entirely reasonable of him to have a bomb given the threatening behavior of the marshals and the cabin crew."

Classy on all sides

Gay families attended the White House Easter Egg Hunt... and the allegedly evil fascist anti-gay President Bush did not stop them or go into a foaming-at-the-mouth rage.
By W.C. Varones - April 17, 2006 No comments:

Justices who use foreign countries' laws to interpret the U.S. Constitution (like Anthony Kennedy and Ruth Baader-Meinhof) are either intellectually dishonest or stupid.

British advice to crime victims: make like a Frenchy and surrender

Self-defense is a crime in Britain:

A storekeeper was knifed in the back as he tackled a gang of youths stealing wine from his Norwich store. He was arrested on two charges of assault.

Shirley Best, owner of the Rolander Fashion Boutique, was ironing some garments when two youths broke in. They pressed the hot iron into her side and stole her watch, leaving her badly burnt. "I was frightened to defend myself," said Miss Best, "I thought if I did anything I would be arrested." In July 2002, a shopkeeper, Richard Barnes, hit a teenage thief whom he had confronted with a single blow. The thief had previously thrown a punch at him. Mr. Barnes was arrested, tried before a jury, and eventually acquitted after a three-day trial in the Hull Crown Court.

"It doesn't matter who's marching in the streets: lazy students or German soldiers," President Jacques Chirac proclaimed. "People are people and France is France. We surrender!"

How's that adjustable-rate mortgage treating you?

I'll bet you can't wait for your next rate reset, with rates doing this: 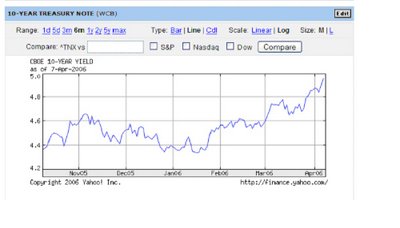 Yet another rabidly partisan teacher tries to indoctrinate young minds.

Bonus features on this round: profanity, and the fact that the teacher is running for Congress.

But, hey, biology is science, right?

Congress wants to take your poker away

Like poker? Keep the jackasses in Congress from banning it.

NBC Dateline wanted to do a story on how anti-Muslim Americans are.

So they dressed some people up as Muslims and dragged them through a NASCAR event, hoping that someone would harass the "Muslims" or otherwise behave badly.

Republicans against the First Amendment

Congressional Republicans have voted against freedom of speech.

In a transparent ploy to gain political spending advantage while at the same time appearing to do something about lobbying, they have voted to limit 527 groups.

Democrats, of course, would do the same thing if it was to their advantage, but it's not. 527 groups are thought to help Democrats more than Republicans.

If the partisan Senate and President go along with this, I hope the Supreme Court bitch-slaps them all. Ever hear of the First Amendment?
By W.C. Varones - April 08, 2006 No comments:

The amateur stuntmen in Bumfights are collecting hundreds of thousands of dollars for their efforts.

The video's producers, while creative, funny, and good marketers, could have used some lawyers to draw up the talent contracts before shooting.

You can still order Bumfights here. It's a real original, and worth the $20.

Lefties with a sense of humor

Ya gotta admit this is pretty funny. 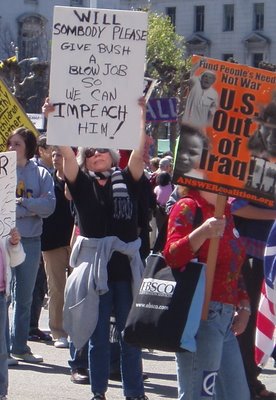 I sold half my position. I'll keep the other half in hopes of a May run-up for the Russell 2000 addition.

And congratulations to those that bought NOOF along with us. While we're at it, the buy gold/buy stocks/avoid bonds trade is still working too.

Last month, I asked, "How low can a Bush Administration official sink?"

Little did I know. A Bush Administration official can sink much lower:

Brian J. Doyle, 55, was arrested at his residence in Maryland on charges of use of a computer to seduce a child and transmission of harmful material to a minor.

It's bad enough that selfish, self-righteous, latte-sipping hybrid drivers take up space in the carpool lanes when driving solo.

Now comes evidence that hybrids are worse for the environment than gas-guzzlers.
By W.C. Varones - April 04, 2006 No comments:

The downside of conservatives

Canada has been run by left-wing idiots for decades. So it was welcome news when center-right non-idiot Stephen Harper became Prime Minister.

Just too bad he's going to stop one of the only sensible things the socialists wanted to do: legalize marijuana.
By W.C. Varones - April 04, 2006 No comments:

The Economist on France:

This particular stand-off, between the centre-right government of Dominique de Villepin and those protesting against his effort to inject a tiny bit of liberalism into France's rigid labour market, may be defused. The Constitutional Council was due to rule on the legality of the new law on March 30th. But the underlying difficulty will remain: the apparent incapacity of the French to adapt to a changing world....

The delusion is that preserving France as it is, in some sort of formaldehyde solution, means preserving jobs for life. Students, as well as unqualified suburban youngsters, do not today face a choice between the new, less protected work contract and a lifelong perch in the bureaucracy. They, by and large, face a choice between already unprotected short-term work and no work at all. And the reason for this, which is also the reason for France's intractable mass unemployment of nearly 10%, is simple: those permanent life-time jobs are so protected, and hence so difficult to get rid of, that many employers are not creating them any more. 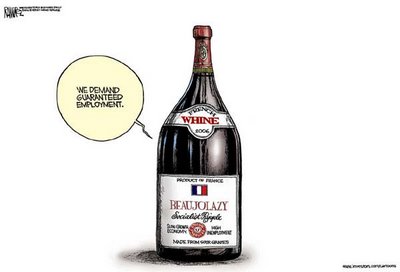