It takes a special kind of asshole to send you mail to discuss the fact that you asked not to be sent mail.

Say, isn't than an American M-16 being used by ISIS terrorists to commit mass murder? 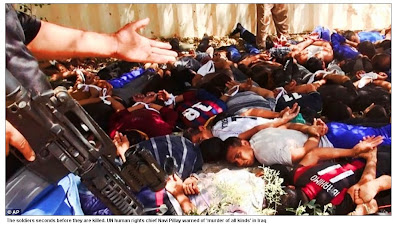 ... by luring children to be smuggled by human traffickers.

Even the palace guard NBC News is reporting it.

... on CNBC, on the tax code, corporate welfare, free markets, Main Street vs. Wall Street, and the Fed.


There are signs that some of the victory was due to Democrat crossover voters, whether they responded to his message of freedom or just to mischievously "get Cantor."  Hey, democracy's a bitch.  And Brat has a populist, anti-corporate welfare message that could appeal to a lot of Democrats and independents.
By W.C. Varones - June 11, 2014 1 comment:

A hungry mob is an angry mob


I tremble on the eve of WWIII as I watch the ingredients of this terrible recipe mix as if by invisible hand. Alas there is no invisible hand for war - merely ignorance and hatred that spread when vigilance is forgotten in the pursuit of selfish materialism. Or was it the pursuit of tolerance? I am grimly in accordance with the statement that Golden Dawn is using Democracy to end Democracy. How could their rise have been tolerated? How could this be happening in Europe AGAIN?


In an explosive political climate, where popular rage is at boiling point nearly five years into the country's worst crisis in living memory, the politics of hate so embodied by Golden Dawn is becoming increasingly pervasive. "Who cares if six million Jews were exterminated?" asked the businessman back at the cafe, in a shocking endorsement of that reality. "I don't care if they were turned into soap. What I care about is the salary I have lost, the never-ending taxes I am forced to pay, the criminals who rule this country, the anger I carry inside."

In the words of Bob Marley, "A hungry mob is an angry mob." EU debt slavery is choking Greece. They should have defaulted and gone back to the drachma, but their politicians are doing the bidding of the Euro banksters. So you get what we had here last week... which is the way he wants it... well, he gets it.

It was externally-imposed reparation debt that set the stage for the stagnation and inflation that gave rise to the Nazis in the 1930's.  When will they ever learn?

Here's Cramer discussing why this morning's ADP payroll report was so bad despite business being good.

We've known about this phenomenon for years.

1) Obamacare creates a strong incentive not to hire (remember incentives?)
2) Rise of the Machines