JF: From Bloomberg - Why I Invested in Bitcoin...by Chamath Palihapitaya

WCV: I don't buy it, and strangely I find myself using the same arguments people make against gold.

JF: Ha, that’s kind of why I thought it was interesting

WCV: The thing is gold, silver, platinum, etc. are a very limited number of precious metals.

In that respect, Bitcoins are a lot more like fiat currencies.

JF: Right I agree. The matrix reference I didn’t think helped his argument. He could have started the Op ed off my saying “hi my name is XXXXXXX, and I have so much F U money I have decided to give Bitcoin a ride”

And that's all I have to say about that.

News you can use

Statcounter is a fun blog tool that lets you know what kind of keyword searches bring visitors to your blog. 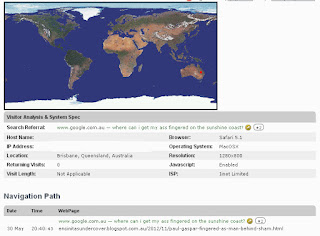 Burning to death is much better than getting shot

Just ask Jon Stewart if you don't know how many mass killings there have been in Australia since the gun ban of 1996.

Oh wait, there was this one.


SYDNEY — A nurse has pleaded guilty to murdering 11 elderly people by setting fire to the Sydney nursing home where he worked.

Coincidence? You make the call:

Today's episode of Greenspan's Body Count comes from the uber-rich Bay Area community of Woodside. When I say uber-rich, I mean sick uber-rich. We're talking billionaires. I think Charles Schwab and Ken Fisher live there. Probably Larry Ellison too. It's down the peninsula from San Francisco, so convenient for both Frisco banksters and Silicon Valley CEOs.

But garden-variety eight-figure multi-millionaires live there too. And it is on one of these lesser rich that the wrath of Alan Greenspan descended:


A Woodside man on the brink of financial ruin shot his artist wife twice in the head and staged the bloody bedroom of their mansion to look like a suicide to make good on more than $30 million in life insurance policies that wiped away his debt, according to jurors who found him guilty of first-degree murder for financial gain.

And check out this earlier attempt:


After she survived overdosing on pills in March 2010, Parima Parineh reportedly expressed surprise her husband was still alive, which Finigan said showed she thought the couple had a suicide pact. Peter Parineh later told his son he “missed out” on $30 million dollars. On the stand, Parineh said the comment was meant as sarcasm.

"Hey, honey! Let's both kill ourselves. Tell you what, you go first!"


The Parineh family had five properties in foreclosure, a commercial building that had been taken over for lack of payment and its estate once worth tens of millions of dollars had all but disappeared.

P.S. If you're going to try to make it look like a suicide, don't shoot her twice in the head.

Even Congresswoman Loretta Sanchez gets it: the Fed creates wealth inequality

It's gratifying when even the dullest tool in the shed catches on.

From Congresswoman Loretta Sanchez's (D- Orange County, CA) question to Ben Bernanke (Sorry about the caps, that's the way the transcript came. Bold is mine):


THANK YOU, MR. CHAIRMAN. THANK YOU FOR BEING BEFORE US. WE HAVE HAD MANY CHIP -- WE HAVE HAD MANY YEARS WHEN YOU'RE THE PRESIDENT ECONOMICS ADVISOR AND NOW FED CHAIRMAN.
I HAVE QUESTIONS ABOUT YOUR -- ABOUT THE ECONOMY. I REMEMBER WHEN CHAIRMAN GREENSPAN WAS BEFORE US. I SPOKE TO WHAT I THOUGHT AT THE TIME WERE HOUSING MARKETS. OF COURSE, SINCE HAVING LEFT, I COMPLETELY MISSED WHAT WAS GOING ON. I WANT TO GO BACK TO HOUSING BECAUSE I THINK IT IS SUCH AN INCREDIBLE HE'S OF THE AMERICAN FAMILY'S BUDGET. THEIR SENSE OF WEALTH CREATION. IN MANY WAYS, IT IS THE FIRST STEP. IT IS WITH GREAT VIEWS TO PUT KIDS THROUGH COLLEGE, ETC. AROUND THE NATION, AND A LOT OF MARKETS, IN PARTICULAR IN CALIFORNIA, HOUSING PRICES ARE GOING UP. EVERYBODY IS CHEERING, AND EVERYTHING. WHAT I SEE IS FOREIGN MONEY COMING IN. MONEY BEING BOUGHT AS INVESTMENTS. BANKS ARE FLUFFING OFF LARGE AMOUNTS OF HOMES AND PUTTING THEM INTO HEDGE FUNDS. THESE FUNDS HOLDING ONTO THESE AND RENTING THEM OUT, ANTICIPATING AT SOME POINT, I AM SURE, FIVE OR 10 YEARS DOWN THE ROAD, TO GET APPRECIATION OUT OF THOSE ASSETS. RENTAL MARKETS TIGHTENING THEIR BID RENTS GOING THROUGH THE ROOF. YOUR AVERAGE WORKING FAMILY, AT LEAST WHERE I LIVE, IS NOT ABLE TO BUY A HOME BECAUSE OF THESE, IF YOU WILL, HOUSE -- IF YOU WILL, HAVES, WHO HAVE THE MONEY TO BUY THE HOME, [...] BUT ACTUALLY HOLD IT [...] FOR RENT TO THE FAMILIES WHO NOW ARE BECOMING, UNLESS WE CHANGE SOMETHING, PERMANENT RENTERS. HOUSING MARKET GETTING BETTER, BUT NOT FOR THE MIDDLE CLASS OR THE HIGHER-LOWER INCOME CLASS. ALMOST CHANGING THEM, I WOULD SAY, INTO THE INABILITY TO FIND THEIR WAY TO HOMEOWNERSHIP. DO YOU SEE THAT GOING ON? DO YOUR PEOPLE SEE THAT GOING ON IN THE MARKETS? WHAT CAN THE CONGRESS DO TO ENSURE, NOT THE OTHER WAY, WHERE WE WENT WRONG, THAT TOO MANY PEOPLE THAT SHOULD NOT HAVE GOT IN, BUT THAT WHAT WE WOULD NORMALLY CALL THE MIDDLE CLASS AND PEOPLE WHO SHOULD BE ATTEMPTING TO BUY HOMES, NOT GET CAUGHT IN THIS CYCLE OF, I DID NOT GET IN AND I DID NOT GET A HOME.

Your ObamaNation Food Stamps at work 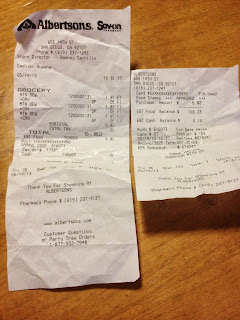 Purchase of three able-bodied twenty-somethings whose other cargo was a 12-pack of Shock Top beer.

Kevin Williamson for the win

Longtime hero of the W.C. Varones Blog Kevin Williamson does what we've all wanted to do in a theater (no, not the Fred Willard thing; the standing up to cell phone jerks thing).
By W.C. Varones - May 16, 2013 1 comment:

Saving for retirement in the 21st century 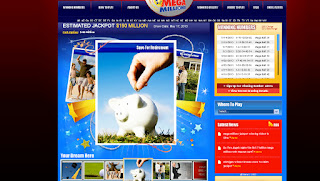 Is the lottery really your best shot at avoiding Alpo in your old age?

Apparently so. 57% of workers surveyed had less than $25,000 in total savings and investments.

1) Buy any asset that is not yet in a bubble, because it soon will be.

Is Janet Yellen just like Ben Bernanke except not a complete moron?

That's the impression you get from this Hilsenrath Wall Street Journal tribute:

Later, as president of the San Francisco Fed, Ms. Yellen sounded early warnings about the danger of a U.S. housing bust. "I still feel the presence of a 600-pound gorilla in the room, and that is the housing sector," she said at a June 2007 policy meeting, according to Fed transcripts. "The risk for further significant deterioration in the housing market, with house prices falling and mortgage delinquencies rising further, causes me appreciable angst."

"A big worry is that a significant drop in house prices might occur in the context of job losses, and this could lead to a vicious spiral of foreclosures, further weakness in housing markets, and further reductions in consumer spending," she said, at a September 2007 meeting. "The potential effects of the developing credit crunch could be substantial."

Contrast that to what Bozo the Bernanke was saying at the time:

The group gave its top award, the Grand Golden Fleece, to the Poway Unified School District for a $105 million bond issue that will cost taxpayers nearly $1 billion to repay. The unfavorable rate structure was exposed by former reporter and blogger Joel Thurtell of Michigan last year.

$105 million that will cost $1 billion? Who would approve of such idiocy? Oh. That's right, the San Diego County Taxpayers Association:


The bond also had considerable cachet, thanks to a coveted endorsement from the San Diego County Taxpayers Association. Indeed, association President Lani Lutar’s name was first on a list of five local dignitaries named on the ballot as supporting the bond.

The San Diego County Taxpayers Association represents developers and crony capitalist interests, not taxpayers. It is a pay-to-play organization, and its board and executive committee are a who's who of people doing business with government agencies.  No doubt some of them expected to get lucrative construction contracts from the Poway school bond.  Lutar herself is a government insider with no taxpayer advocacy experience but plenty of experience with unaccountable big-money government bureaucracy SANDAG and the crony capitalist convention center project.

But giving the Golden Fleece Award to Poway for a bond the SDCTA themselves endorsed? I hereby pronounce the SDCTA the winner of the Golden Gonads Award.
By W.C. Varones - May 10, 2013 1 comment:

A Carlin for our time

The dude is good.

No silver for you!

Remember the physical gold shortage of 2008? Spot prices were down, driven by leveraged futures traders, but people trying to get their hands on physical at anywhere near spot prices were out of luck.

Well, the same thing is happening in silver today. The spot price got crushed alongside gold in April from $28 to about $22, now just below $24. But try to get some silver at that price.

Take Liberty Coin and Precious Metal, a shop that has always had very consistent supply. I've never walked in there and not been able to get as much gold or silver as I wanted.  Until today: 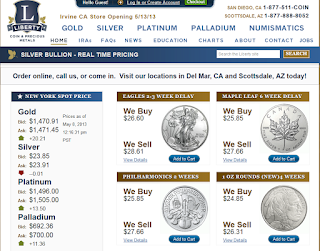 
The federal government says Indiana's suicide rate among its middle-aged population surged nearly 54 percent from 1999 to 2010, giving the state one of the nation's biggest such increases.

Thursday's report from the Centers for Disease Control and Prevention shows Indiana's suicide rate increase among people ages 35 to 64 was nearly twice the national increase of 28 percent.

The CDC report's 11-year time-frame includes the recession and the mortgage crisis, yet it doesn't indicate what may have driven the increases in middle-aged people taking their own lives.

But researcher Thomas Simon with the CDC's Injury Prevention Center says some of the possible factors behind the increases could include the baby boomer generation's historically higher suicide rate, the impact of the recession and increasing substance abuse.

Yeah, substance abuse. That's it. They didn't have drug addicts in the 90's.

Who knew Howard Stern was the lead singer of REO Speedwagon?

If you'd asked us an hour ago who sang the early 80's power ballad "Keep on Loving You," we'd have guessed Journey or Foreigner. And we wouldn't have been able to name a single song by the actual band, REO Speedwagon. Thanks to the magic of the Sirius Satellite Radio, we now know the truth.

And thanks to the magic of YouTube, we've discovered a wonderful lost video.

If you know your history...

T-Dub sends in this quiz:

The start of growth in income inequality coincides with what historical event? 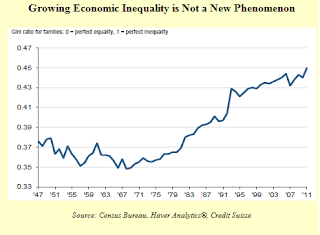 ANSWER: dbbeebs and DooDoo Economics nailed it. In 1971, President Nixon, an admitted Keynesophile, took the dollar off the gold standard and turned it into a pure fiat currency managed by the propeller-heads at the Dirty Fed.

P.S. Note that the exact same time is when commodities went Full Retard and hourly wages decoupled from productivity.
By W.C. Varones - May 01, 2013 7 comments: