The year of the 1%ers

What bitter irony that in the year following the re-election of the most left-wing President in history, America's wealth and income inequality continues surging to new highs.

Real estate is re-bubbling, the stock market is skyrocketing, but job creation is slow and the new jobs tend to be low-paying and/or part-time.  Real median household income is still well below where it was a decade ago.

There are many reasons for the growing inequality.  At the top end, Fed easy money is at the top of the list for increasing stock and real estate wealth and incomes in banking, real estate development, and related industries.  The crony capitalist / corporatist regime in Washington D.C. is not far behind, with the Washington suburbs becoming one of the wealthiest areas in America based on buying and selling policies that rule the rest of us.

At the other end of the spectrum, automation and outsourcing certainly play a large role in the decline of the middle class.  But throughout history, jobs lost to technology have been replaced by new jobs in new industries.  Is this time structurally different?  The new Obamacare mandate certainly doesn't help.  Why would businesses hire more full-time employees with expensive Obamacare mandates when they can much more cheaply hire part-time, or even outsource or automate?  High consumer indebtedness, too, surely discourages business expansion, as there's no point making more products if the customers are maxed out.

What's the outlook for 2014?  Wall Street strategists see an acceleration in economic growth based on the housing rebound and the domestic energy boom.  That's certainly plausible, and even looks like the default scenario barring an unforeseen shock.  Rising health care costs due to Obamacare could certainly be one such shock, but would likely take more than a year to derail the recovery.  So a best guess for 2014 would be more of the same: Wall Street and Washington lobbyists getting richer, the middle class struggling under heavy debt loads and stagnant income.


Debt is serfdom, capital in all its forms is freedom. The only leverage available to all is extreme frugality in service of accumulating productive capital.

Get out there and accumulate some capital. The outlook ain't getting any better for labor.

News you can use

McDonald's internal employee web site gave employees advice on how much to tip their maids and pool boys.
By W.C. Varones - December 26, 2013 1 comment:

It's bad enough when one person writes something obviously wrong (like Chriss Street did last week).

But how do two supposedly intelligent people collaborate on a short editorial and both not realize that what they are writing is ridiculous?

Richard Riordan and Tim Rutten in the Sacramento Bee, on whether to default on municipal bondholders instead of cutting pensions:


Some will argue that it’s better to hurt “fat cat” investors than retirees on fixed incomes. That’s nonsense, however. The majority of municipal bonds are purchased by funds whose shares are held by private pensions and individual 401(k) accounts precisely because they’ve been seen as low-risk investments. That means that trying to resolve a municipal bankruptcy entirely on the backs of bondholders just spares one group of working people by hurting another.

That's nonsense, however. Municipal bonds are tax-free (other than the short-lived Build America Bonds), so it would be financial malpractice to put them in a tax-sheltered account such as a pension fund or 401(k). The tax-free status is of most benefit to high-net-worth investors, and that's who owns the vast majority of municipal bonds (whether through a fund or held directly).

There are plenty of reasons not to advocate default before pension cuts. But pension funds and 401(k)s holding muni bonds is not one of them.
By W.C. Varones - December 23, 2013 1 comment:

What to get for the WCV reader who has everything 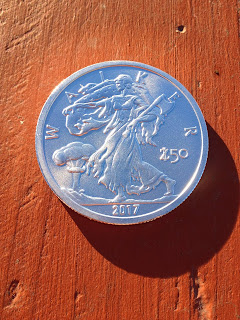 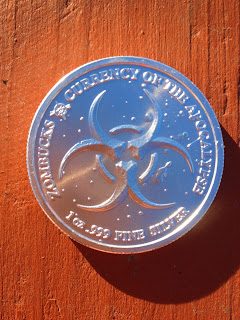 Zombucks, the currency of the apocalypse. My favorite is the Walker (above), which is sold out but you can still find it on eBay.
By W.C. Varones - December 23, 2013 No comments:

As we've said over and over, it's all about the incentives.

ZeroHedge has pointed out the welfare cliff, where government payments punish work and reward quitting your job or cutting your hours.

Now there's an ObamaCare cliff: middle class families are screwed if they have to pay the full price of ObamaCare. The solution? Cut back on work.


Ginger Chapman and her husband, Doug, are sitting on the health care cliff.

Doug and Ginger Chapman with their son Charlie Galanes, 11. They are looking for new coverage after their plan was canceled.

The cheapest insurance plan they can find through the new federal marketplace in New Hampshire will cost their family of four about $1,000 a month, 12 percent of their annual income of around $100,000 and more than they have ever paid before.

Even more striking, for the Chapmans, is this fact: If they made just a few thousand dollars less a year — below $94,200 — their costs would be cut in half, because a family like theirs could qualify for federal subsidies.

Not much thinking going on at American Thinker


One of the reasons the reported unemployment rate isn't higher is that the State of California's [sic] statistically considers all 1,427,000 welfare recipients to be "employed."

No evidence is given to support this assertion; the link is to a blog that makes the same unsupported assertion.

This statement was so ridiculous on its face that I responded instinctively:


Get your facts right, moron.

All welfare cases are not counted as employed in the official unemployment stats. Where would you even come up with something so absurd?

Admittedly, it's bad form to initiate a discussion by calling someone a moron, but the combination of ignorance and arrogance by a publication proclaiming itself the "American Thinker" is enough to make me do Very Bad Things.


It is referred to as "welfare to work". It can be training, counseling or education that is treated as "employed": http://www.ppic.org/content/pubs/report/R_512CDR.pdf

... which obviously doesn't support the assertion, but does give an indication of where Street came up with such a dunderheaded idea.


If you have any sources to back up your assertion, I would be most interested to read.

From the link you provide: "As Table 3 shows, less than a third of parents in CalWORKs families were working at all in 2009 (27%)"

As I'm sure you know, the enforcement of the "job-related-activities" rules are pretty lax. Basically, you say you read the help wanted ads and put in a job application somewhere, etc., and they're not going to kick you off welfare.

So where do you get the idea that nonworking TANF recipients are being counted as employed?

Credibility is a precious thing, and easy to lose. American Thinker squanders it by publishing unvetted material from unproven writers.

Colorado school shooter was a Keynesian


In one Facebook post, Pierson attacks the philosophies of economist Adam Smith who through his invisible hand theory pushed the notion that the free market was self-regulating. In another post, he describes himself as "Keynesian."

It's a very short logical step from the Broken Window Fallacy to the Wounded Bodies Fallacy. Keynesians believe in breaking things, starting wars, and creating nonsensical busywork to boost their idol, Gross Domestic Product (GDP). Think of all the GDP that Pierson created. 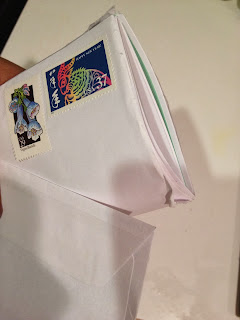 ... where your mail from political dissident groups comes conveniently pre-opened!
By W.C. Varones - December 13, 2013 No comments:

Great personal finance tips here from Forbes. Browse them all. It won't take that long.

Many are ideas we've discussed here over the years. Many will be new to you.

One I will disagree with is #353: Own gold through ETFs like GLD. We've discussed before why that's a bad idea. It's not clear that all the ETFs actually own segregated physical gold that hasn't been leased or swapped or otherwise encumbered by the big banks. Buy physical gold coins.

Today is a nationwide fast food strike, where workers in minimum-wage jobs demand "living wages." Hint: if you're trying to support a family while still flipping burgers, you're doing it wrong. Fast food jobs are for young people to learn job skills and customer service before acquiring education or other skills that will allow them to get real "living wage" jobs. They're also not bad for senior citizens to stay active and supplement their Social Security.

Our Los Angeles correspondent I.P. Freely will be reporting live throughout the day from McDonald's restaurants. 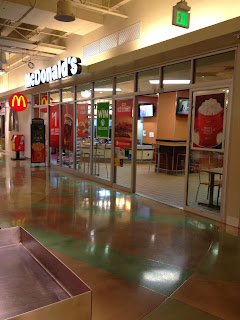 
Report: Meal number 2: Not a picketer in sight. I counted 14 employees working diligently behind the counter, of which I could see. This McDonald's is in the heart of downtown Los Angeles and probably has more lunch time volume than 90% of all McDonalds.
But the picket lines seems to have overlooked this one. I will try another later today. Service: extremely fast and efficient, even considering the size of the order when I bought for my entire office. Food: scrumptious 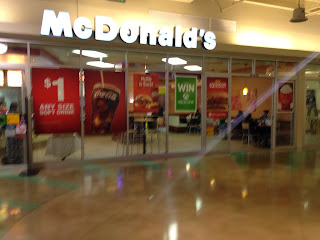 Report: Snack
Now, I'm not sure of the wages earned by people at Starbucks or Wetzel's Pretzels, but I assume you can classify them as fast food. All employees working there. No picket lines at the hub of transportation for Los Angeles, Union Station.
Food: Tasty 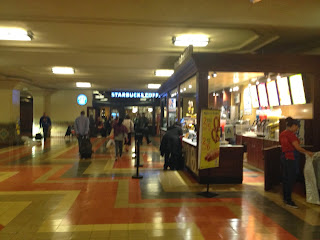 Report: Now in LA, when you go buy somewhere and shoot, it's called a "drive by," which I did for this McDonald's looking for picketers.... Disappointed, I saw none. 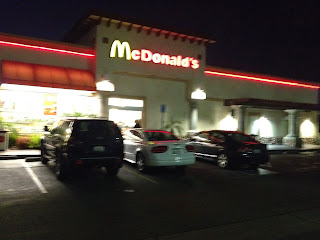 Report: Last and final fast food joint today. I did not get to see any protesters all day. I would have thought it would have been a little more difficult to enjoy the convenience of a quick, cheap bite to eat today specifically, according to the MSM. But no, a normal day. I have been satisfied gastronomically and I still have a good bit of funds in my wallet for an adult beverage served to me by someone smart enough to realize they are in an entry level job working their way through school, served to me well enough to earn an extra large tip for their enthusiasm. This is IP Freely reporting from the greater LA area. 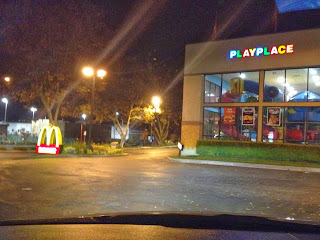 Our friend Adrienne Gonzalez of Jr. Deputy Accountant has been named managing editor of Going Concern, the web's most popular (and funniest) accounting site.

JDA's hits over the years include getting the name "Zimbabwe Ben" in print in Time Magazine.

Let it never be said we don't have an eye for talent.