Lying liars at CalPERS want help with their propaganda website

Earlier this month, we showed how CalPERS was using its web site to deliberately deceive the public about their absurd investment promises and terrible results.


We are conducting a research study for CalPERS and inviting individuals to participate in one-on-one sessions. If you are interested in participating and are in the Sacramento area, please complete the quick survey below.

NOTE: When there are openings for volunteers, we will contact you to schedule a 60-minute session with you. We will then confirm location, date and time with you.

Click through to the survey to see if you qualify.


Former President Bill Clinton and his daughter, Chelsea, plan to stop raising money for the Clinton Foundation and turn over operations to independent parties if Democratic candidate Hillary Clinton is elected president, according to people familiar with the plans.

So Hillary will no longer use the Clinton Foundation as a vehicle for massive corporate and foreign bribery if elected President.

Too bad the lapdog media never questioned her on it while she was blatantly selling policy favors for cash as Secretary of State.

I love the poorly educated


Donald Trump lives, works, eats and employs people of all races and religions. 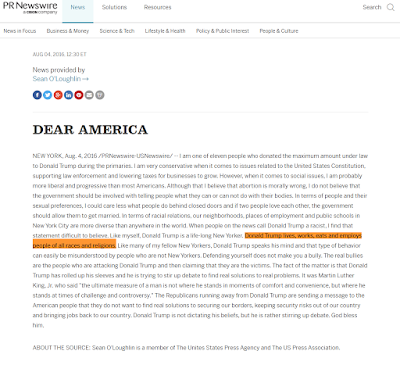 You probably know that CalPERS recently reported yet another year of investment results that fell far short of its absurd promises.

But did you know that CalPERS is actively, deliberately deceiving the public about its investment promises and results?

CalPERS has a section called "Myths vs. Facts" on its website where it tries to debunk critics of its rosy expected returns, which experts nearly universally believe are too high.  Here's what the site showed until mid-July:

This is a recurring theme of CalPERS propaganda: pay no attention to expert opinion, zero percent interest rates, or historically high valuations.  CalPERS can always expect high returns because CalPERS earned high returns in the past.

After a second consecutive year of dismal returns, the statements above about 20- and 30-year returns are no longer true.  This spreadsheet shows the past 21 years of returns, taken from CalPERS annual reports (we could not find data prior to 1996).  CalPERS' 20-year annualized return is now just 6.57%... and it's about to go a lot lower because it is rolling off four more consecutive years of double digit returns from the tech/internet bubble.

Last year, CalPERS semi-acknowledged that it needed slightly less crazy assumptions, promising to eventually lower expected return... but only after it has a really good investment year first.  That's like a heroin addict promising to quit after just one more fix.

Given that the CalPERS "Myths vs. facts" statement was no longer true, we were curious to see what CalPERS would do after 2016's bad results came in.  And CalPERS did not disappoint:

Look what they did here.  In mid-July 2016, after they had already reported 2016 results, they went back and cherry-picked time periods ending June 30, 2015.  If we don't cherry-pick the data, the truth is that CalPERS has missed its annual return targets for all of these time periods: 1-year, 3-year, 5-year, 10-year, 15-year, and 20-year -- and the long-term returns are even worse than the recent years!  CalPERS is deliberately misleading the public!

If we can't trust CalPERS even to be minimally honest with the public about its investment returns, why are we trusting them to manage hundreds of billions of dollars for retirees and taxpayers?

UPDATE: Thanks Mish and Yves!