Over at Econbrowser, Professor Hamilton discusses a recent paper by Blinder and Watson that looks at the difference between GDP growth rates under Democratic and Republican administrations.  Growth is higher under Democratic administrations, but the researchers find that this is due to luck, not policy.  Republicans tended to be in office during GDP-killing oil shocks, while Democrats benefited from things like the productivity-enhancing growth of Walmart.

But the third factor after oil shocks and productivity gains cited by the authors is "more optimistic consumer expectations (as measured by the Michigan ICE)."  Could this be influenced by more optimistic media coverage of the economy during Democratic administrations?  Remember the relentless drumbeat of negativity in the media during the second half of the Bush I presidency? Surely that constant refrain begins to affect consumer sentiment.  A 2004 Federal Reserve study found that indeed, news coverage does significantly affect consumer sentiment.  Meanwhile, the entire Obama presidency has been a worse economy than Bush I in terms of unemployment, underemployment, welfare dependency, and the wealth gap, but the media coverage has been muted on the economy and fawning on Obama personally.

Media bias toward liberal views is well-documented, and the vast majority of national news reporters and producers reflect their New York - Washington DC surroundings and vote consistently Democratic.  It would be naive to believe these views don't affect their coverage of the economy, or that the tone of media news coverage doesn't affect consumer confidence.
By W.C. Varones - November 30, 2013 1 comment:

Hear it from the mouth of the "beneficiary."  Is this the country you want?  Is this good for the recipients?

Proving once again that a little knowledge is a dangerous thing, Bloomberg / Businessweek reporter Kyle Stock beclowns himself by pretending to understand financial ratios.


Forget the door-busters, coupons, and “friends and family” deals. U.S. shoppers on the whole will be paying more over the next few weeks than they do the rest of the year. Turns out, retail profit margins tend to be higher during the holiday period, despite all the promotions.

Among the 15 largest U.S. retailers, operating margins in the holiday quarter last year were 11 percent, compared with 9 percent in the preceding nine months. Amid the year-end shopping frenzy, these companies padded their bottom lines, on average, by roughly one-quarter. 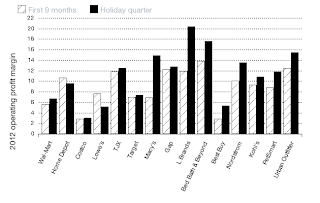 
Home Depot (HD) and Lowe’s (LOW) may be the only places where a shopper can expect to catch an honest break at the end of the year. Macy’s (M), Bed Bath & Beyond (BBBY), and L Brands (LTD), the company behind Victoria’s Secret, are particularly adept at producing opulent holiday returns.

Obviously, Home Depot and Lowe's have different seasonal trends than clothing stores, being more related to home and garden work and less related to drywall under the Christmas tree. If Kyle had bothered to take even a cursory look at the financials, he'd notice that gross margins for the two stores are fairly steady throughout the year, but operating margins are lower in winter because of lower seasonal sales.

Not everyone understands the basics of financial statements. But for someone who is paid to write about this stuff for an alleged business publication to be this ignorant is truly stunning. The magazine that couldn't tell an empty suit from a messiah 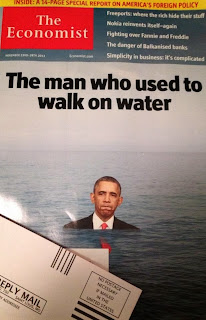 We were commenting just yesterday that Greenspan's Body Count has slowed down. Most victims of Greenspan's bubble have long since been foreclosed, gotten loan mods, found new jobs, or otherwise hung onto their houses long enough for Bernanke's echo bubble to bail them out.

Well, speak of the devil...


Police say they have uncovered a critical piece of evidence that is shedding light on what lead to two deaths over the weekend at a Fresno home. The man who police believe shot and killed his wife and then turned the gun on himself left behind a note.

Family members Monday said Harmandeep Singh left a suicide note that was turned over to detectives. While the couple may have seemed to be all smiles around their family, police are finding there were some underlying problems.

Since Saturday, investigators have learned the pair had some financial problems police believe may have contributed to the murder-suicide.

Harmandeep Singh and Karanjit Kaur lived at 6577 West Celeste Avenue in Fresno, purchased for $470,000 in June 2007 and now worth $298,000 despite Bernanke's best efforts to equal Greenspan's bubble-blowing.

Thought for the day

Who would have thought that a guy with no understanding of economics trying to rule a command economy by executive order would be a problem?
By W.C. Varones - November 15, 2013 1 comment:

Zimbabwe Janet: I'm going to keep printing like a mofo

From the mouths of maniacs:


We have made good progress, but we have farther to go to regain the ground lost in the crisis and the recession. Unemployment is down from a peak of 10 percent, but at 7.3 percent in October, it is still too high, reflecting a labor market and economy performing far short of their potential. At the same time, inflation has been running below the Federal Reserve's goal of 2 percent and is expected to continue to do so for some time.

For these reasons, the Federal Reserve is using its monetary policy tools to promote a more robust recovery. A strong recovery will ultimately enable the Fed to reduce its monetary accommodation and reliance on unconventional policy tools such as asset purchases. I believe that supporting the recovery today is the surest path to returning to a more normal approach to monetary policy.

Sounds like she just took the December taper off the table.

Thought for the Day 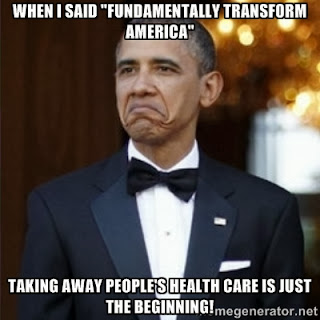 We've been thinking a lot about bubbles lately. Bonds are clearly in a bubble by any measure. Real estate has surpassed the highs of the last bubble in many high-end areas.

Stocks are at all-time highs, and at extremes by many valuation measures after four and a half years of double-digit returns. But as we noted in 2010, the government and the Fed can't afford to let stock or real estate prices fall. Since that time, the banks have earned their way back to healthy balance sheets thanks to free Fed money, but households and Federal, state, and local governments would all be devastated by a collapse in stocks and house prices. It's not CPI deflation the Fed is terrified of; it's asset price deflation. Therefore, the printing will continue as long as it's necessary to keep asset prices up.

John Mauldin has an excellent review of the history of financial bubbles over the last 100 years here. You'll have to sign up for his free newsletter to read the whole thing, but that's something you should do anyway. In summary, the history of the Fed is a series of asset bubbles in different asset classes. What's different this time is the deliberate intent and extreme measures of central banks to keep asset bubbles inflated.

So what's an investor to do in an era of infinite global fiat currency? It would seem to be a pretty good bet to buy any asset class that's not in a bubble, and then just wait until that asset class's turn comes around. We have been fortunate enough to invest pre-bubble a handful of times over the years: tech stocks before the late-90's tech bubble, commodities before the 2008 commodity bubble, Amazon.com between the first and second bubbles, and housing between the last and current bubbles. Of course, we've never been great about timing the exits, but even occasionally selling a fraction of a position during a bubble can be tremendously profitable.

What asset classes are not in a bubble right now? Try these for a start. 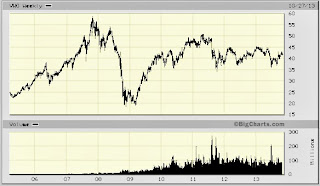 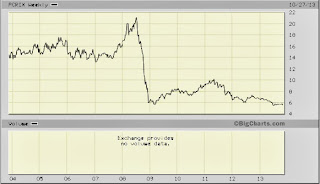 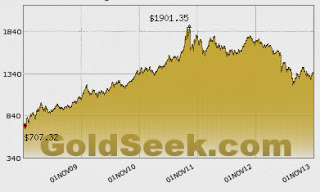 Of course, it still makes sense for long-term investors to have a diversified, equity-heavy asset allocation. But adding tactical tilts to these three asset classes could give you a lot of bang for your buck.
By W.C. Varones - November 03, 2013 No comments: