Bernie Madoff's consistent returns earned him the nickname "the Jewish T-bill." While 10% - 12% annual returns were too good to be true, the market does offer some nice, consistent yields now and then.

Back on Thanksgiving 2008, we pointed out that you could buy a very well-known semiconductor stock with a rock-solid balance sheet with a dividend yield of 4.5%, paying more than long-term Treasuries.  That stock is now up 91% since then, and the dividend has increased three times and is now 50% higher.  If you'd bought then, you'd be earning 6.75% on your cost in addition to nearly doubling your principal.  Even at the current price, the stock still yields more than 30-year Treasuries, and dividends look set to continue increasing while Treasury coupons remain fixed at anemic levels. (Note: the balance sheet is no longer as rock-solid due to an acquisition and the opportunistic issuance of a modest amount of long-term debt at attractive yields to fund stock buybacks.)

While the hyperinflation we feared back then has yet to materialize, the U.S. fiscal and monetary situation has continued to deteriorate.  We recently crossed 100% debt/GDP (even excluding off-balance-sheet liabilities like Medicare, Fannie/Freddie, and state and local pension obligations).  To put that in perspective, here is a historical chart. 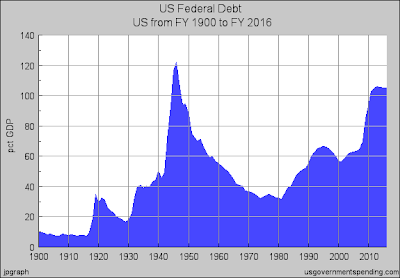 The only other time in history we had these debt levels was at the end of World War II, where we'd sent millions of people and machines halfway around the world to fight global fascism. How did we get out of it then? Two ways: 1) immediately stopping the deficit, and 2) serious inflation. As soon as WWII ended, the US cut the deficit to zero and actually ran surpluses in the late 1940's and early 1950's. 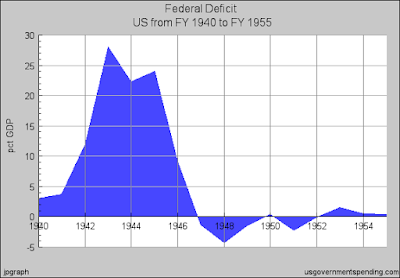 In contrast, four years after the financial crisis, we are still running trillion-dollar deficits, and both Obama and the cowardly Congressional Republicans plan to run deficits at least in the high hundreds of billions as far as the eye can see. 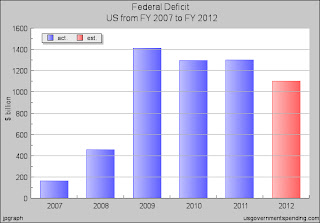 As for inflation, did your high school history teacher tell you about the inflation the US used to erode the value of the debt?


That's a cumulative devaluation of 34% in three years!  Patriotic investors who had bought war bonds yielding low single digits had their faces ripped off.

It took large doses of both fiscal austerity and inflation to get us out of 100% debt/GDP in the 1940s.  Given that neither political party is proposing even modest fiscal responsibility now, eventual inflation is the closest thing to a sure bet I can imagine.

WWII war bond buyers lost money to help their country fight fascism.  Are you willing to lose money to prop up the Obama regime?
By W.C. Varones - January 22, 2012

Well said!! I figure we all get our faces ripped off several times at this rate.

Still waiting for that hyperinflation? How's that bet going so far.

Check out a chart of gold the last several years. Heck, even stocks have been pretty good.