Are Scandis the most ironic people on earth? 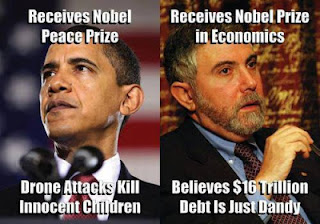 To be fair, Krugman got his Nobel before he abandoned economics to become a political hatchet man, and for a topic that had nothing to do with deficit spending. And Obama received his Nobel before he started drone striking children, for his outstanding achievement in having an awesome aura.
By W.C. Varones - June 03, 2013

Bonus points for the Scandis: pursue the religion of multiculturalism like their souls depended on it and then give out parking tickets to cars burned by rioting "youths."

Krugman allegedly got his "Nobel" for (not particularly new or important) reseach he did before he became a political hack. He actually got the prize because of his pathological hatred of Republicans in general and George W Bush in particular. Likewise, Obama got his Nobel for not being Bush. Both awards were intended by the Euro-centric Nobel committees to embarass Americans for their poor political choices. How's that working out for them, ya think? Full disclosure, I'm no fan of Bush or the GOP, but they are, relatively speaking, shining lights compared to Obama and Krugman.

You are correct. The Scandis gave him the prize in 2008, when he had long since become a partisan hack.

I did not know that. And I did not think my opinion of the Scandis could sink any lower. I was wrong.

Well, their women, in general, do look good in bikinis. Lets not throw out the baby with the bath water, so to speak...