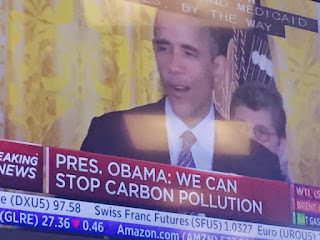 Now that carbon is a pollutant, we are all just waste material. We should thank Planned Parenthood for dealing with the problem at the source.

"It's a natural element, and one of the basic building blocks of life on Earth."

So are nitrogen and phosphorus, but if you get too much nitrate or phosphate into a river or lake, you get a eutrophic mess and all the fish die. And yet, in other circumstances, exactly the same chemicals are called fertilizers. Calling something a "pollutant" is like calling a plant a "weed" - it is all about being somewhere that you don't want it, and has nothing to do with whether it is a good thing to have in some other location.

If you want to argue that we need not worry about increasing CO2 in the air because you think it will be cheaper to manage the effects as they come up than to try to cut emissions, fine. I think that argument has a lot of merit, myself. But please don't pull out the old "it's harmless because it's natural" schtick. You know what kind of people make that argument. You don't want to be like them.