Is the middle class disappearing into the upper class?

Depends how you define "upper class." And "constant dollars." 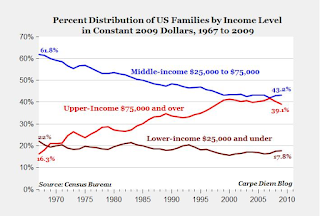 First, $75,000 household income is hardly "upper class." You can't even buy a house on that income in many areas.

Second, those "constant dollars" are deflated by CPI or some similar measure, which understate inflation due to flat screens, iPads, and computers getting cheaper while the cost of necessities (housing, food, and energy) increases. I am certain that $75,000 "constant dollars" in 1967 bought a lot more house, food, and gasoline than it buys today.

Finally, this is household income, and largely reflects the shift from one-income families to two-income families. Needing two incomes to scrape by is supposed to be good news?
By W.C. Varones - July 23, 2013 2 comments:

On Friday, when discussing with friends the San Diego Democratic Party's support for well-known creep and serial sexual harasser Mayor Bob Filner, I commented, "The only thing worse than a slimeball creep to a Dem voter is a Republican."

And now we have confirmation of that point from one of the victims.


She said the mayor did this to many women, and many people knew about it.

“It’s one of the worst kept secrets in town,” Woman One said. "Everyone in the power structure knew this,” she said of people in local government.

Women Democrats have so bought into the Democrat / mainstream media (but I repeat myself) canard about a Republican "war on women" that they actually supported and worked for a creepy old serial sex abuser over young, socially liberal, gay Republican Carl DeMaio.

The same thing happens with African-American voters. Joe Biden tells a black audience, "they [Republicans] gonna put y'all back in chains," and the media push the false storyline about voter ID being a Republican ruse to disenfranchise black voters. And despite the horrible, destructive effect of Democratic policies on the African-American community, blacks continue to vote overwhelmingly for the party of 19th century slavery, 20th century segregation, and 21st century multi-generational welfare dependency.

See also The Collaboration of the Fourth Estate.


Huong is among millions of Vietnamese who hold an estimated 300 tons to 400 tons of bullion to store their wealth -- valued at as much as $19 billion at domestic prices and equal to official U.K. holdings -- a legacy of more than a century of war, revolution and economic turbulence. The central bank wants to convert the hoard, much of it smuggled in, into dong deposits to strengthen the currency, which has slid 21 percent against the dollar in five years.

Private gold holdings “reflect both the Vietnamese cultural values as well as the lack of confidence in the dong,” said Trinh Nguyen, Hong Kong-based economist at HSBC Holdings Plc. “High inflation and depreciation of the dong in the past have caused people to keep their savings in gold.”

Instead of giving Granny the hard dong she so desires, the government of Vietnam is, like so many other governments around the world, making it more difficult and expensive for her to use her solid gold substitute.
By W.C. Varones - July 15, 2013 2 comments:

Things you probably shouldn't have to think about for a week


A mother visiting the Escondido library the morning of June 22 told police that a strange man followed her around the aisles.

The woman said she was at the library that Saturday with her two children, aged four and six, when the man eventually came close and then touched himself and winked at her children, police said.

After thinking on the matter for a week, the mother contacted Escondido police on June 29 to report the incident, according to police Lieutenant Neal Griffin.

... not that there's anything wrong with that. 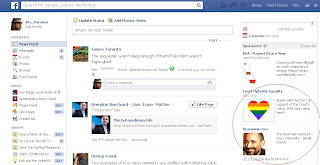 You might want to work on that profiling algorithm, Zuckerberg.

I'm happy to click the DSCC link and cost Chuckie Schumer and Harry Reid a buck or two, though.

The politicization of the University of California is complete

For background on the bloated and corrupt University of California, please see here, here, and here.
By W.C. Varones - July 12, 2013 No comments:

Hedge fund invests in Obama crony capitalist scam; is shocked when Obama changes the rules of the game


The lawsuit, filed in U.S. District Court in Washington, alleges that the Treasury and the regulator for Fannie Mae and Freddie Mac violated a 2008 law that put the two mortgage companies into conservatorship as they faced insolvency at the height of the U.S. financial crisis.

The Treasury Department amended the bailout terms last year, forcing Fannie Mae and Freddie Mac to hand over most of their profits to the government, replacing a requirement that the companies pay quarterly dividends of 10 percent on the government's nearly 80 percent stake.

The suit names both Treasury and the Federal Housing Finance Agency (FHFA), which regulates Fannie Mae and Freddie Mac.

Perry Capital, which began investing in both firms in 2010, claimed in the lawsuit that shareholder value was impaired when the government instituted a "dividend sweep."

The new arrangement prevents the firms from building capital that might have allowed them to redeem the government shares and eventually operate independently to the benefit of private shareholders.

"This lawsuit seeks to uphold the rule of law," Theodore Olson, a partner at the law firm Gibson, Dunn & Crutcher and a former U.S. solicitor general, said in a statement.

A few things that might enlighten your dinner-table discussions:

- FAA sets a limit on pilots of 100 flight hours in any 28-day period. If your route is trans-Pacific, that means you do no more than four round trips a month. If there are four pilots on each flight, and the plane often is auto-landed, how proficient do you think pilots are at hand-landing the plane?

- News reports indicate police had to throw knives up to the flight crew to free passengers from their seats.  Thanks to TSA policy, no one on the plane had, or could have had, a knife to help himself or other passengers. Imagine slightly different circumstances--open field, slower response, faster fire--and this policy could have fried people alive.

- There's a decades-old joke that in the future, planes will each have a man and a dog in the cockpit.  The man will be there to watch the computer, the dog to bite him if he touches anything.  Too long in the making?
By Anonymous - July 07, 2013 3 comments:

And now the moment of truth arrives. Can Zimbabwe Ben seamlessly hand off a centrally planned economy to a new, self-sustaining free market economy?

He has erected a multitude of New Offices, and sent hither swarms of Officers to harrass our people, and eat out their substance.

He has kept among us, in times of peace, Standing Armies without the Consent of our legislatures.

He has affected to render the Military independent of and superior to the Civil power.

He has combined with others to subject us to a jurisdiction foreign to our constitution, and unacknowledged by our laws; giving his Assent to their Acts of pretended Legislation:

For imposing Taxes on us without our Consent:

For depriving us in many cases, of the benefits of Trial by Jury:

For transporting us beyond Seas to be tried for pretended offences