Powerlineblog has a good take linking Al Gore to Ukraine -- but what about Washington state?

Bin Laden calls for boycott! I was on the right track!

Another beneficiary of the Schwarzenegger amendment?

The A.P. says Osama bin Laden wants to transform from terrorist to politician.

Could that be because he is now pathetic and impotent as a terrorist?

Barbra Streisand is an entertainer without peer -- unintentionally, though. She is the William Hung of political discourse. In her latest published mental spasm, she declares, "The idea of a liberal media bias is simply a myth... Frankly, the idea that the media is sympathetic to conservative causes rather than liberal ones is obvious, for reasons of ownership, economics, and outside pressure."

As for little counter-examples like RatherGate, "As we have known for years, the details of Bush's service record offered in the story were true... although the document presented in the piece is in question." So if the left-wing anchor presents blatantly forged documents obtained by his left-wing producer from a partisan political operative, and defends these documents for a week in the face of overwhelming evidence that they are forged, that's not media bias, it's a case of "real journalists who objectively present the news in order to allow the audience to make up their own minds."

RatherGate is just anecdotal evidence of media bias though. For a thoughtful, clear and convincing analysis of media bias, look to this academic study. Incidentally, CBS News ranks rather biased in the study.

I haven't been a big fan of the Bush/Ashcroft Justice Department, but this (via Instapundit) is beautiful. It's about time somebody finally stood up and interpreted plain English as it was intended. The asinine argument that the "militia" subordinate clause negates the entire meaning of the whole amendment is central to the authoritarian effort against the right to bear arms, and this brief smashes the argument well.

How the mighty have fallen

Remember when Bin Laden was the terrifying face of evil, and struck fear in the hearts of Americans everywhere?

In October, he revealed that he had been reduced to a whiny Democrat complaining about Bush like Al Franken and Janeane Garofolo. Now that smiting the infidels seems a bit out of reach, he encourages devotees, "Go on and try to prevent them from getting oil." What's next, executive producing Michael Moore's next movie? Joining Jesse Jackson to boycott American companies that discriminate against terrorists?

What a pathetic, impotent jackass. Looks like the Global War on Terror is working.

This from the Americans for Civil Liberty Usurping.

Not going to happen

The Economist editors reckon that Arnold Schwarzenegger should be allowed (subscription required) to run for president, although they don't want to see him win (groping and eerie similarities to Hitler -- both are from Austria! -- bother them too much).

It's not going to happen. The Constitutional amendment process is too difficult, and requires 38 states' legislatures to ratify. Democrats in control of many of these legislatures will never allow Arnie to become the face of the Republican Party. Arnie is a charismatic, socially tolerant, fiscal (sort-of) conservative. He'd easily win 55% of the popular vote, and likely make the Democrats a permanent minority party. Hell will freeze over before Democrat legislatures commit political suicide like that.

The Club for Growth racked up an impressive record in the 2002 elections, but lost a few high profile elections (Specter vs. Toomey, for one!) this year. Did they win anything in 2004? You wouldn't know from their web site!

UPDATE: A pretty successful 2004 record is revealed, but only for members (free membership login required).

Wish I was there

Time to buy beachfront property in Canada.
By W.C. Varones - December 17, 2004 No comments:

FASB on the job

A good step forward. Let's hope the evil Senator Boxer doesn't get her way and prevent the Financial Accounting Standards Board from setting financial accounting standards.

And here's a persuasive piece from an unimpeachable organization.

Is the First Amendment alive?

Finally, some welcome news from the out-of-control FCC.
By W.C. Varones - December 15, 2004 No comments:

This is the first concise explanation of the Kyoto Protocol I've read.

Thoughts: "converging" to emissions caps on a per capita basis is ludicrous. Wealthy economies naturally will have higher emissions than poor countries that have little industry and few cars. A better idea would be to keep the caps based on economic output, and better still to allow trading of emission credits. This would encourage countries to develop policies that maximize output and minimize emissions, and would discourage unproductive causes of emissions such as gas-guzzing cars.
By W.C. Varones - December 15, 2004 No comments:

I can't understand why MSN.com doesn't more prominently feature one of its best columnists, MSN Money commentator and hedge fund manager Bill Fleckenstein. His weekly piece is always insightful if always bearish. His columns should be required reading for those leveraging themselves to the hilt in real estate.

MSN, however, doesn't list his column on the MSN Money home page. Clicking into the "Investing" section still doesn't show a trace of Fleckenstein. Even an MSN search for "Fleckenstein" shows a dozen other irrelevant hits before listing his column.

Don’t know if I’m comin’ up or down 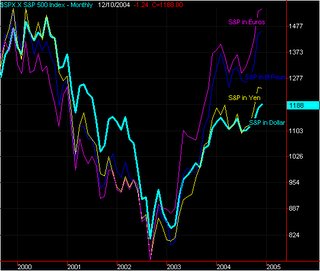 UPDATE (12/15): The column has been heavily edited, without comment. Gone are the graph, much of the text, and most of the braggadocio and name-calling.
By W.C. Varones - December 14, 2004 No comments: