We'd never heard of the web magazine Aeon before, until a friend sent us this outstanding "Emperor has no clothes" article: The new astrology: By fetishising mathematical models, economists turned economics into a highly paid pseudoscience.


The failure of the field to predict the 2008 crisis has also been well-documented. In 2003, for example, only five years before the Great Recession, the Nobel Laureate Robert E Lucas Jr told the American Economic Association that ‘macroeconomics […] has succeeded: its central problem of depression prevention has been solved’. Short-term predictions fair little better – in April 2014, for instance, a survey of 67 economists yielded 100 per cent consensus: interest rates would rise over the next six months. Instead, they fell. A lot.

Nonetheless, surveys indicate that economists see their discipline as ‘the most scientific of the social sciences’. What is the basis of this collective faith, shared by universities, presidents and billionaires? Shouldn’t successful and powerful people be the first to spot the exaggerated worth of a discipline, and the least likely to pay for it?

In the hypothetical worlds of rational markets, where much of economic theory is set, perhaps. But real-world history tells a different story, of mathematical models masquerading as science and a public eager to buy them, mistaking elegant equations for empirical accuracy.

Long-time WCV readers will recognize this as a recurring theme here, most notably in our periodic sparring with University of Wisconsin Professor Menzie Chinn.

Menzie Chinn is first and foremost a partisan polemicist: a poor man's Paul Krugman who uses the thin veneer of academic credentials to relentlessly boost Democrats and bash Republicans.  But partisan cranks on the internet are a dime a dozen; what makes Menzie special is his unwaivering faith in mathematical models and his complete ignorance of the limitations of the data that the models are built upon.

One favorite example is here: Menzie defends President Obama's Panglossian economic forecasts from skeptics who ask, “Is the White House’s 3.1% growth forecast still too rosy?” (spoiler alert: yes, yes it was). Menzie uses a mathematical model with a fancy name (autoregressive integrated moving average, or ARIMA) to come to the brilliant conclusion that since GDP has grown about 3% in the past, it's likely to grow about 3% in the future.

Anyone with the slightest understanding of economics will know that there are a lot of factors that affect GDP growth, not the least of which are demographics and debt levels, and that current conditions are in many ways starkly different than the conditions that prevailed in the last half of the 20th century. But not Menzie Chinn. Past results are a good enough indicator of future performance for Menzie Chinn.

One particular factor that created tremendous GDP growth from the 1960's to the early 2000's was the explosion in the Total Credit to GDP ratio. Total credit includes all borrowing (debt) whether public or private, which flows directly into GDP. To refresh, GDP is defined as

...with Y being GDP, C being consumption, I being investment, G being government expenditures, and X being net exports.  Any new debt directly increases GDP: spend $100 at a restaurant on a credit card, that's $100 in Consumption; a business borrows $10,000 from a bank to buy a new machine, that's $10,000 in Investment; the government runs a $500 billion deficit to bomb wedding parties overseas and hand out food stamps and Obamaphones at home, that's $500 billion in Government spending.  All new debt creation flows directly into GDP.

Here's what happened to the Total Credit to GDP ratio over the past 50 years (St. Louis Fed):

The TC/GDP ratio has more than doubled, from under 150% in the 1960's to more than 375% at the peak of the recent bubble. Since then, it has declined  a little  due to foreclosures, bankruptcies, and consumers paying down debt, and recently plateaued around 350%.  All this excess debt creation flowed directly into GDP growth, explaining a large part of the robust growth of the past 50 years.

By assuming that future GDP growth will match past GDP growth without even considering the contribution of Total Credit expansion, Menzie is implicitly assuming that Total Credit / GDP will again more than double to more than 800% of GDP.  Common sense says there's a limit to how much debt an economy can service; and our guess it that it's well short of 800% of GDP.  Even Japan, which is currently in a zero-GDP-growth debt death spiral, has public and private debt amounting to far less than that.

We pointed out the flaw in Menzie's logic in the comments on his post, and it was immediately clear that he had never even thought about the contribution of debt increases to GDP growth, or indeed, any factors other than putting a historical time series into a mathematical model and seeing what comes out the other end.  And in the ensuing back-and-forth, it became quite clear that while Menzie is capable of running an ARIMA model, he is completely incapable of engaging in even the most basic economic reasoning.

We hereby nominate Menzie Chinn for the Nobel Prize in Economic Astrology.
By W.C. Varones - June 26, 2016 No comments:

Congratulations to the people of Great Britain on their Independence Day! 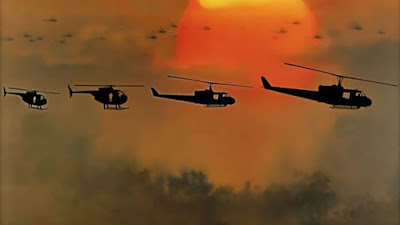 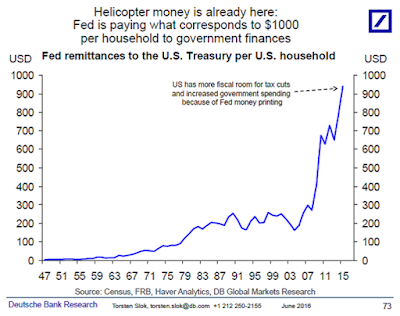 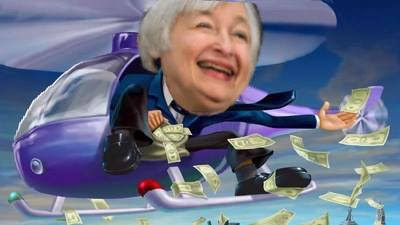 So much for the War on Drugs

Plan to Keep San Diego High Could Be on November Ballot
By W.C. Varones - June 15, 2016 No comments:

Ethereum is the new Bitcoin

The price of Bitcoin has exploded recently: 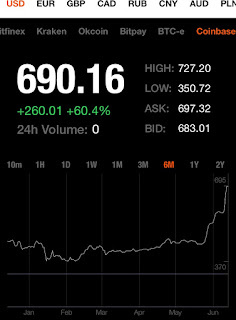 The tech intelligentsia are saying that a new technology, Ethereum, is better than Bitcoin.  Don't ask me; I just spot a trend and ride it.  I took a small portion of my Bitcoin and traded it for some Ethereum.

If you want to get started in Bitcoin or Ethereum, take a look at Coinbase, an easy place to transfer in money and buy and store Bitcoin.  Its related exchange GDAX will allow you to trade dollars or Bitcoin for Ethereum.
By W.C. Varones - June 14, 2016 No comments:

North Carolina State Board of Elections:

Still time to dump the "Embarrassing Loser" before he does this to the entire party?  Ace thinks so.
By W.C. Varones - June 08, 2016 5 comments:

The Wall Street Journal is way too optimistic on pensions

The Wall Street Journal is trying to make the point that pensions' assumed 7.5% rate of return is increasingly difficult to achieve, but even the Journal's numbers are still way too optimistic. 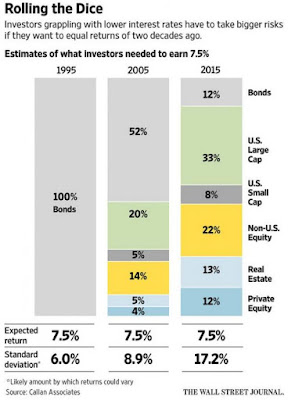 The Journal thinks that with the portfolio on the right, you can still get 7.5% annual returns.  With 12% of the portfolio in bonds, where the Vanguard Total Bond Market is yielding 2.5% and prices have nowhere to go but down, you'd need a permanent bond market plateau and you'd have to earn 8.2% on the rest of your portfolio to get that 7.5% overall.

How are equities supposed to generate 8.2% in an era of 2% GDP growth, 2% inflation, 2% interest rates, and historically high valuations?  The Journal doesn't explain.  Famed investor Jeremy Grantham of GMO doesn't think they're going generate anything close to that.

What has the above portfolio actually earned in the past year?  Not so pretty.  Here's what it looks like, assuming small allocations to high-yield, emerging markets, and foreign real estate within the broader asset classes, and making the generous assumption that private equity returned 3% more than US Large Cap.

That looks a lot more like Jeremy Grantham's numbers than 7.5%!

It is certain that CalPERS is going to report yet another horror show of a year for its fiscal year ending June 30.

Our man in Vegas writes:


GTO and the next generation

When I started in poker, the original batch of road gamblers from Texas was sainted and revered. "Nobody played better than Johnny Moss," or "For my money, Jack Strauss was the best gambler who ever walked." A lot of the old faces still frequented the games: Bobby Baldwin and Doyle Brunson at the highest levels, and guys like Slim Preston and Eskimo Clark scraping around the small games.

Fast forward a decade and a half, and poker bears little resemblance to what it once was. The new crop are the furthest thing from gold-chained cigar chompers or Texans with ten-gallon hats and shitkicker boots. They're suburban dweebs who grew up reading internet forums about combinatorics and GTO play (that's game theory optimal, for you old-timers). And at a card table full of these kids, between you and me, the old guys don't stand a fuckin' chance.

This progression of the game is impressive in one respect. Poker seemed to defy cold calculus for some time, due to the element of hidden information. You can teach a computer every combination on a chess board, but can you teach it about tilt and when and why and who to bluff? As it turns out, yes, yes you can. Limit Hold 'Em is for all practical matters solved as thoroughly as chess, and the rest of the games will fall as quickly as programmers and neural networks care to knock them down. There's still some magic and art in translating this math to a table of meat puppets in the real world, but that's beside the point.

The game has moved beyond the crafty sharp with nerves of steel. That guy is the fish.

In another respect, this progression is devastating: it's killing poker. Not the game, but the scene. Tourists enjoyed taking a shot against the Texan with his toothpick and his whiskey and his charm. They would probably lose to him, but they got a bit of entertainment for the price of admission. And they had the sense that as much as they were gambling, the Texan was gambling back at them.

That is just no longer the case, and it is no longer the vibe. At anything above the lowest stakes, the dismantling of the tourist is clinical and brutal. The professional is frequently charmless and ungracious, and wears his contempt for the inferior player on his sleeve. Losing to the new breed is no fun for anybody.

This brings us to what we see at the Wynn this week: packed house and nobody wants to play poker. Sure, you can scrape out a few bucks, but the days of tourists and weekend punters wanting to come fire at the poker tables seem to have passed. Inside that room are crickets, and a bunch of kids who learned a lot about tactics and perhaps less about the long game.