We gave Obama the benefit of the doubt eight years ago.  How did that work out for us?
By W.C. Varones - January 20, 2017 No comments:

Global elites seek to ban cash so that the little people can't trade without official knowledge and approval.
By W.C. Varones - January 18, 2017 1 comment:

So much for the War on Drugs! 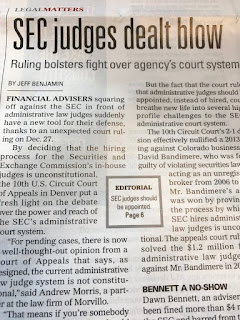 A decade after the peak of his diabolical, deliberately created housing bubble, the 21st century's most prolific serial killer is still killing.  Less than a month after his most recent murder, Alan Greenspan has killed a married couple in Las Vegas.


An elderly couple who died in a joint suicide faced a recent history of credit card debt and other financial troubles, court records reveal.

Emi and Glen Yamasaki, both 63, were seen driving to the fifth and highest floor of the parking garage at the Silverton Casino Hotel in Las Vegas, Nevada, on Wednesday night, before they jumped off together, police said.

Discover Bank reached a $15,400 settlement on their credit card debt in early December, and their next-door neighbors sued the couple for $2,400 on December 15, according court records cited by the Las Vegas Review Journal.

Court records obtained by the newspaper showed the pair had a history of financial troubles.

Discover Bank filed a complaint against the couple in April, and Emi Yamasaki signed an agreement to make monthly payments of $200 on November 4.

A settlement with the bank was reached, and a judgement of $15,400 was entered against the couple on December 2, according to Clark county District Court records.

The couple had also purchased a home in Sun City Anthem in Henderson, Nevada, in 2005 for about $415,000 - although a filing suggests they were at risk of foreclosure.

Twelve years after Greenspan's bubble, that home Zillows at $384,000.