The lesson of the first Thanksgiving: socialism kills

Reposted from 2010.  More relevant now, obviously. Long before Barack Obama and Elizabeth Warren were "fundamentally transforming" America, the first settlers had their own little experiment with socialism.


The first winter was disasterous - nearly half of the Pilgrims died of starvation, pneumonia and tuberculosis. Many claim that Bradford's first wife perished that first winter, but that is not quite true - she actually fell off the Mayflower quite close to land and drowned, never making it to Plymouth (he later remarried.)

During the first two years the colony lived under what could only be called Communism, enshrined in the Mayflower Compact. Each person was accorded a "share" of the totality of what was produced at the colony, and each person was expected to do their part in working toward the common good. The land, and that upon it, was owned by the colony as a collective.

It not only did not work out, it nearly killed them all.

William Bradford wrote in his diary "For in this instance, community of property (so far as it went) was found to breed much confusion and discontent, and retard much employment which would have been to the general benefit and comfort. For the young men who were most able and fit for service objected to being forced to spend their time and strength in working for other men’s wives and children, without any recompense. The strong man or the resourceful man had no more share of food, clothes, etc., than the weak man who was not able to do a quarter the other could. This was thought injustice.”

After the second winter, realizing that the colony had survived only through the friendship and largesse of the native Americans, and would soon perish if changes were not made, Bradford tore up the Mayflower Compact. He instead assigned each family a plot of land to be their property, to be worked as the family saw fit, and with the fruits of that land to be their own. It was the beginning of private property rights in the New World.

The result? Again, from his diary: "It made all hands very industrious, so that much more corn was planted than otherwise would have been by any means the Governor or any other could devise, and saved him a great deal of trouble, and gave far better satisfaction.”

From the very day that Bradford tore up the Mayflower Compact, Plymouth began to prosper. Within a year the colonists found themselves with more food than they could eat. Flush with a bountiful harvest far in excess of their need for food and having bartered for all the goods they needed to get through the winter, they had a feast of thanks with their Indian trading partners.

Don't hold your breath waiting for the leftist teachers unions to teach this lesson to your children. Better show them this video from Reason:


At the end of the APEC trade summit in China, U.S. President Barack Obama announced a climate change agreement with Chinese President Xi Jinping that would cut both countries' greenhouse gas emissions by close to a third over the next two decades.


A senior administration official calls the goals both "ambitious and achievable," but also acknowledged that U.S. domestic politics could put a damper on the announcement. Saying "leading climate deniers" in the GOP might try to stop the initiative, the official hinted the President may act alone if necessary.

China promising to do something 16 years from now in exchange for Obama issuing executive orders today is bad enough (and of extremely dubious enforceability), but Hoye's opening two paragraphs flatly contradict each other. How does China continually increasing emissions through 2030 "cut both countries' greenhouse gas emissions by close to a third over the next two decades?"

China is already a much larger greenhouse gas producer than the U.S., so any hypothetical cuts in the U.S. will be dwarfed by the increases that Obama negotiated for China.

P.S. China is dumping thick, black smog into its cities which causes serious health problems and causes public discontentment with leadership. Then when they don't meet smog reduction goals, they just hide the data. Do you really think China gives a rat's ass about a little clean, naturally occurring CO2?
By W.C. Varones - November 12, 2014 No comments:

First it was bubble-blower extraordinaire and progenitor of his own prolific Body Count, Alan Greenspan.


TETT: Do you think that gold is currently a good investment?

GREENSPAN: Yes... Remember what we're looking at. Gold is a currency. It is still, by all evidence, a premier currency. No fiat currency, including the dollar, can match it.

Now it's Greenspan's fellow mass murderers ISIS (or ISIL, or IS, or Islamic State, take your pick):


ISIS wants to introduce its own currency and plans to bring back solid gold and silver dinar coins, it has emerged.

The Middle East terror group apparently wants to introduce its own Islamic currency as part of its attempts to solidify its makeshift caliphate.

Militants are said to want to bring back the original dinar, which is an ancient currency from early Islam, and religious figures in Mosul and Iraq’s Nineveh province have apparently announced its return in mosques.

The currency known as the dinar, which once consisted purely of gold and silver coins, is today used by a variety of countries, but the coins are created from different materials to the originals.

However, the jihadi group is understood to be planning to return to the original gold and silver coins, which were first introduced during the Caliphate of Uthman in 634 CE.

Usually it's the other way around

Californians want to slit their wrists

Check out the map of people's life satisfaction by city. 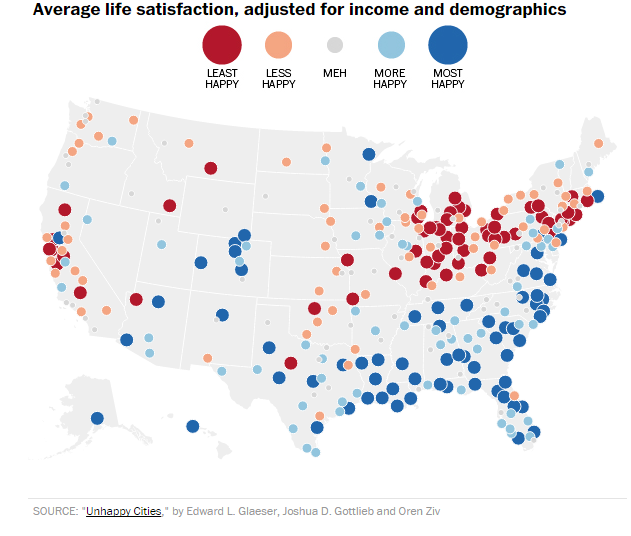 There's obviously a huge weather effect, with people being much happier in the sun belt and miserable in the cold northeast, but California manages to create misery even with the country's best weather and beautiful geography!

Therefore, it will not happen?


A Republican takeover of the U.S. Senate on Election Day would promise increased political turbulence for the Federal Reserve.

Financial executives say a GOP-led Senate would ratchet up congressional scrutiny of the central bank's interest- rate policies as well as its regulatory duties as overseer of the nation's largest financial firms. Republicans haven't controlled the Senate since before the 2008 financial crisis and recession, which put a spotlight on the Fed and its powers.

"If the Republicans take control of the Senate and thus have control of both the House and the Senate--two words for the Federal Reserve: Watch out," said Camden Fine, president of the Independent Community Bankers of America.

Leading the GOP wish list in dealing with the Fed would be legislation to open the central bank to more scrutiny of its interest-rate decisions, using congressional audits of monetary-policy matters that Fed officials strongly oppose. Many Republican lawmakers also want to require the Fed to use a mathematical rule to guide interest-rate decisions or shift its focus more directly to inflation rather than inflation together with unemployment. All of that would come on top of heightened bipartisan scrutiny of the Fed's regulatory moves.

Nah, even if the Republicans take the Senate, I'm sure the Fed will find the new majority can be quite flexible...