Next month, China will ring in the Year of the Pig. Nestlé SA planned to celebrate with TV ads featuring a smiling cartoon pig. "Happy new pig year," the ads said.

This week, China Central Television, the national state-run TV network, banned Nestlé's ad -- and all images and spoken references to the animal in commercials, including those tied to the Lunar New Year, China's biggest holiday.

The intent: to avoid offending Muslims, who consider pigs unclean. "China is a multiethnic country," the network's ad department said in a notice sent to ad agencies late Tuesday. "To show respect to Islam, and upon guidance from higher levels of the government, CCTV will keep any 'pig' images off the TV screen."

There's something very wrong when a society's standards are set by the intolerance of a minority. In America, Jews don't eat pork, Amish don't drive cars, and Catholics don't use condoms, but none of these groups would demand that all references to these things be stricken from American culture. Is it that China is different than America, or that Muslims are different than other religious groups? A whole lot of both, I think.

You may not be able to enjoy Chinese New Year in China any more, but you still can in America. Happy Year of the Pig, everybody! 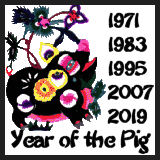