Not that a real financial reform bill is likely even if this one stalls, but it would at least re-open the possibility of addressing Too Big To Fail.

Just like they did May 21 when the Senate passed the Dodd Permanent Too Big To Fail Bill, Wall Street bank stocks rallied Friday on word of House-Senate agreement on the bill: 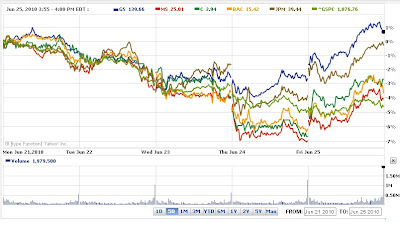 UPDATE: The Klansman has died; analysts expect this to delay, not kill, the fake financial reform bill.
By W.C. Varones - June 27, 2010

I heard about the house passage of the bank reform bill on the BBC during my Italy vacation -- and immediately wondered what you thought of it. It is good to be back -- we will have a lot of work ahead of us this summer.