Privacy-Hating Lamar Smith Is Coming After Your Internet Again 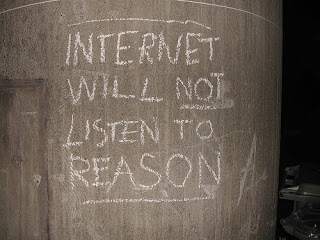 Didn't we just send SOPA stumbling back into the abyss beaten and bruised? Didn't Lamar Smith get busted lifting other people's content without giving them credit like the copyright violators he apparently wanted to target with SOPA? Apparently we did not yell loud enough.

Now Smith, a conservative Texas Republican, is being targeted a second time: for championing legislation that would require Internet service providers to keep track of their customers, in case police want to review those logs in the future. His bill is called H.R. 1981.

"This is yet another government assault on the Internet and its users," said Demand Progress Executive Director David Segal. "We taught Congress a lesson last month: we need to do to H.R. 1981 what we did to SOPA, and make it clear to Lamar Smith and the rest of Congress that they can't run roughshod over Internet freedom."

Here's the funniest part: Republicans in Texas elected this guy (seriously, if he isn't out of a job come November, I've lost all faith in my fellow Americans to get this right) and he's driving the Nanny State surveillance van. Republicans! The guys who are supposed to be for small government and "get off my lawn" and "stay out of my wallet," you know, those guys.

Here's what Texans For Lamar Smith has to say:

Smith is eager to continue his work to help improve the futures of the 700,000 Texans in the 21st District.

"The United States House of Representatives is truly the people's House and I'm grateful for the support of the people who are my constituents," Smith observed. "I'm working hard every day to stay in touch and serve as their voice in Congress."

Truly the people's House?! I could vomit. The people don't want their Internet usage tracked and stored in fusion centers across the country. The people don't want the government in their business (I think that goes for liberals too, it's not a universally conservative idea to retain some sense of privacy in a hyperconnected world) and they don't want the companies we pay tracking our moves on behalf of the government. If you know one such person, please send them my way so I can pick their brain.

I say if he wants us to show him our logs, he shows us his first. Let's see what's in your history, Mr Smith.
By Jr Deputy Accountant - February 08, 2012