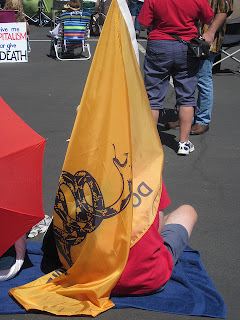 The clear winner of tonight's VP debate was obviously... the libertarians! Why? Because we weren't invited.

Not getting invited to this circus is like getting rejected to participate in The Bachelor. Sure, maybe we could famewhore our way into American homes with slick positions and posturing but why would we want to? It goes against everything we stand for. Because we are about true freedom, not the Nabisco/Monsanto/GM/JP Morgan Chase/Disney/Walmart brand of freedom most Americans cling to as if there is no other option. Little do they know. It is up to you, loyal freedom-loving WCV readers, to show them our political system doesn't have to be like choosing between watching the Real Housewives of Bumfarkery and the Kartrashians on the boobtube. Turning off the teevee is an option too.

Any empty puppet can stand (er, sit) there and spout off the talking points but it takes real guts to sit back, pop the popcorn and let these guys go at each other as if any of it matters.

Would we appreciate the opportunity to present the libertarian view to Americans who mistakenly view libertarians as pot-smoking, gun-shooting, gay-loving indifferent jerks? Sure. Do we need such an opportunity to get our point across? Nope. That's the great thing about believing what we believe, we don't need to prove anything to anyone. Like us if you want. Hey, hate us if you want too! We just don't care, and if nothing else we'll fight for your right to hate us because you, as an American, should be free to hate whomever you like - whether or not you understand where they are coming from - as long as your hate doesn't infringe on anyone else's right to do what they want to do as well.

Keep clinging to that sense of security if it makes you feel better, America, just know we're here ready to present a real alternative when you're ready for it.

And thanks to WC Varones for convincing me tonight to give my one Dictatorship of Columbia vote to Gary Johnson this November. While the "lesser of two evils" approach may work in any other district, seeing as how I'm still technically a resident of DC and the DC slums at that, might as well feel good knowing my throw-away vote went to the right candidate, not the one puppet who is maybe but not definitely less of an ass than the other guy. My DC voting district is the same that has repeatedly re-elected Marion Barry so I'm fairly sure I'll be the only one voting Libertarian this year but hey, no one said being the odd man out would be easy.