Straight out of Beer with Demo's playbook we have a story about beer in our constantly more intrusive nanny state. Strangely though the nanny state of Pennsylvania is pretty long in the tooth with this one. It has to do with how they sell beer here.

Now say what you will about the socialistic leanings of California, but my goodness do they do beer well. There is even a brewery in Scotland that is trying to replicate Californian beer called Brew Dog. Now as an aside, I can't find anything on their website referencing this now but when I visited their brewpub in Camden, London, UK, the bartenders went on about their goal to replicate the brilliant beer being produced in California. So much was this the goal that the bottles they had for sale were from Stone, Anchor, Lagunitas, and Lost Coast, IN LONDON!

Anyway, having arrived in PA I've been shocked into a dark and miserable beer reality that is nanny state regulation of my beer pleasure. In PA the law is this: we have beer distributors that you can drive up to and buy a case of beer. ONLY A CASE of beer. No 22 oz. bottles, no 6 packs, no 4 packs of Dogfish Head 90 Minute IPA. You are only allowed to buy 24 bottles of beer at a time at these beer stores. The ONLY alternative to that is to buy beer from a bar. FROM A BAR MAN! Now you can imagine the cost because they charge you for 6 bottles of succulent Miller Lite what they charge for 1 bottle of Miller Lite x 6 in the bar. It is stupid.

But that is the law in PA. If you want to run a store that sells beer you can only sell cases at a time. But if you are a bar you can sell other denominations, but you are a bar so you might sell at bar prices. Thanks goodness Whole Foods and Wegmans have some clever folks on hand. They get around this, and provide my basic need of a sublime Stone Sublimely Self-Righteous Ale, by opening legal bars within their confines.

Whole Foods in Devon has a pub legally separate from the store called the Mile Post Pub. They have a very good selection of beer matching their offerings in CA but they are also a legal bar selling glasses of wine and beer as well as growlers. So far so good. But a problem remains, Wegmans and Whole Food ARE THE ONLY folks that have figured this out. What that leaves is prices like this: 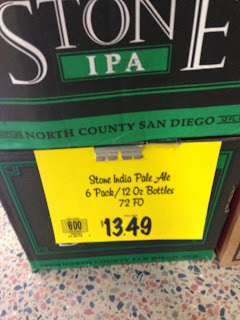 So while I can still get my Stone fix, the cost is most disappointing.

There is a movement to free this up called Free My Beer but it actually depresses me. There is nothing to be gained by the state to reduce beer sales other than possibly prevent dangerous alkies from getting their fix. But really, dangerous alkies will get their fix regardless. So PA loses tax revenue to Delaware and New Jersey for people who say no and deprives me of Stone's latest Enjoy By because vendors don't have an incentive to provide a competitive variety because their competition is so limited. And yet this law does not get overturned in an instance. Why? Well I suppose that when you have a state that protects child molesters so they can have a good university football team then common sense is probably not something you can expect from this lot.

Oh well, Delaware is about 40 miles away and they have no sales tax. I'll be heading there and stocking up once the weather get warmer.

I do thank Whole Foods, who have an excellent staff in Devon, and Wegmans, who not-so-much because they scan every single drivers license to confirm the 60 year old standing in front of them is 60, for setting up shop to provide the micro-brew offerings. At the same time I do miss my local Shell selling a 22oz bottle of Lagunitas IPA for me to easily pick up when I fill my tank. Oh well, I suppose it is the price I pay for getting my house for 60% less than I would pay in the East Bay....
By Negocios Loucos - January 22, 2014

And thanks for Arlen Specter and Rick Santorum, you jerk!

ugh. i grew up under that pain in the Philly area.

and it was only until recent that a few state stores would open on Sunday.

i still get all giggly down in NoVa when I walk into a gas station and there is booze everywhere.