The study shows no such thing. In fact, the data considered in the study aren't sufficient to even attempt to make such a conclusion.

The media gleefully and unquestioningly repeated the CDC's nonsense.

In case I get banned from Twitter for questioning "The Science," here are the tweets: 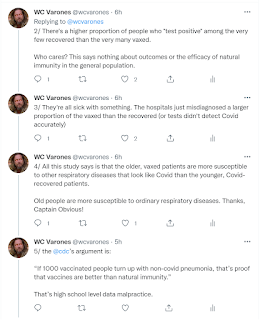 Bottom line: you can't possibly infer the efficacy of either the vaccine or natural immunity from the ratios of positive to negative tests in two narrowly selected groups that bear no resemblance to each other or the general population. Any high school statistics teacher could tell you that.

For example, the vaccinated people skew much older than the recovered in this study. If, as seems obvious, older people tend to go to the hospital more with non-Covid respiratory illnesses than young people do, that would explain this data. Yet the CDC insists this says something about Covid natural immunity instead.

Or if some people went to the hospital due to side effects from the vaccine. "See," the CDC claims, "that improves the ratio and proves vaccines are better than natural immunity!"

Others have pointed out that the 90-179 day post-vaccination window seems cherry-picked to maximize favorable outcomes for the vaccine, as the Israeli and other studies have shown vaccine efficacy drops off significantly after that period. And others have pointed out the tiny sample size of recovered people who were hospitalized and tested positive (i.e. it's both extremely rare for natural immunity to fail, and it's bad science to try to draw conclusions!). And Thomas Massie points out that they are counting “long Covid” as re-infections which might very well explain most of the cases in the study!
This is obviously a politically ordered result to support Biden's vaccine mandate push. The fact that they couldn't come up with a supportable conclusion is telling.

New Zealand PM recently guessed that eventually everyone would be forced to take the jab and that there was no end in sight for boosters (I'm guessing those will be mandatory as well). The icing on the cake is that New Zealand will keep raising the legal age to buy tobacco so that their current crop of teenagers is never old enough to legally purchase a cigarette. Take the jab, no fag for you. Bitch be trippin' on da' power.

It's all bullshit folks, and it's bad for you -
George Carlin