Have you ever felt like your house is just not big enough or ornate enough? Maybe you'd rather live in a 16,000 square foot hacienda with 19th century imported columns and 400-year-old hand-carved mesquite doors? Here is your chance: Casa Simpatica, asking price just $3.15 million. Click on over and look at the pictures before you read on. 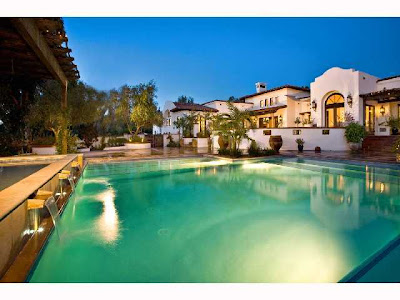 This house first came to the attention of T-Dub, who noticed the unusual size when perusing Jim the Realtor's foreclosure listings (top of page 17 of this pdf):

So the bank is in it for more than $4.5 million, and you can have it for just $3.15 million. Sounds like a deal, no? But you'd have to be a weird kind of dude to want to live there. Despite being on more than an acre, the house has no yard because the full property is taken up by house, pool, and parking lots.
Who would build this kind of monstrosity? We thought it must be some kind of cult compound (it's not too far from the former Heaven's Gate compound in Rancho Santa Fe), or perhaps the command center for an eccentric hedge fund manager. So we did a little investigation, and this is what we found.

Casa Simpatica is the brainchild of one Suzy Brown. You can see Suzy's web site (with lots of pics of the project and the kooky people associated with it) here. Despite being zoned single-family residential, Suzy seems to have been running around with a sales pitch to investors that she was building a 41-bed rehab center. And that did not go over well with the neighbors in the well-to-do Olivenhain section of Encinitas. This Union-Tribune story has a summary, but the juicy details are in this Department of Corporations ruling.
By W.C. Varones - November 08, 2008

Creepy if you ask me.