FROM THE WC SOCCER DESK

Last week we lost legendary Welsh player and manager Gary Speed to, still yet to be determined why, suicide. Yesterday we lost Dr. Socrates to a far more reasonable means of exit, death by alcohol abuse.

Socrates was the captain of the greatest soccer team that didn't win the World Cup, in 1982. While some may debate that, what is not debatable was that he was part of the most loved team in Brazil. That 1982 team was the most elegant practitioners of the beautiful game maybe in history. Socrates was their leader. Click here for a link to a fantastic tribute to that 1982 team. 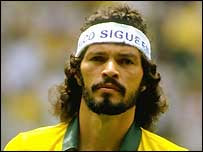 He was known as Dr. Socrates because while playing he earned a medical degree and after his playing career was over became a doctor.

Your Portuguese is better than your English.

i was 6 years old in 1982 but i will never forget the world cup and Socrates either .may rest in peace.