Note: You Can Smuggle Knives Onto a Plane But Not a Fake Bullet Belt 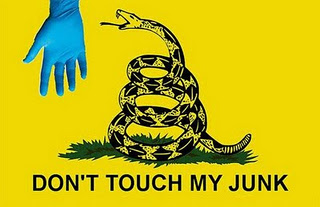 Ahh the TSA. They've molested me, pulled out my questionable battery-operated devices in winding lines, scanned my boyfriend's naughty bits, harassed me for the state of California budget problems that prevented my state-issued ID from being released in a timely manner and destroyed my $700 HP laptop. My relationship with them goes beyond love-hate, it's a necessary evil that I accept as a person who actually needs to get out of town every few weeks or months. I've driven across the country - several times - but with 3 or 4 vacation days to cash in, what can I do but subject myself to the TSA violations just to escape from my homebase for 72 short but precious hours?

So when I read about the person stopped on a Washington to Chicago flight trying to smuggle in knives hidden in a carved-out book (a book about ninjas, none the less), I couldn't help but think back to my harassment on a flight to San Francisco from Richmond way back in 2009:

If anyone recalls, the first time I'd flown in a long time was mid 2009. The very nice but totally wrong TSA agent at Richmond International Airport confiscated my pink bullet belt (available from the terrorist costume outlet Hot Topic) because bullets were a "replica weapon," which are not allowed on American flights. I repeat: fake bullets grommeted to a pink canvas belt, looped into my pants. I'm crying in the airport carrying an Eeyore I used as a pillow and this guy wants to confiscate my lame Hot Topic belt because its (likely plastic) fake bullets "replicate" a weapon. Who am I going to threaten with the fake bullets firmly attached to what is holding up my pants?

Whatever. I let him toss it in the trash. It's not worth getting violated (I had been on vacation, I'd spent days doing that anyway) over a cheap ass belt. It was an awesome belt. My pants slipped down my ass all the way home once I made it back to San Francisco. Dickhead.

Anyway. What happened to the wanna-be ninja shlepping daggers to Reagan Airport in a ninja book? Finally, we know.


WUSA reports there are no plans to file charges, since investigators determined the passenger was not a security threat.

If I would have fought the TSO in Richmond about my precious bullet belt, I'd have missed my flight while sitting in a Richmond Airport jail cell. And yet, you're telling me some dude tried to hide knives in his carry-on and yet wasn't charged with anything?

There is something horribly fishy about this story.
By Jr Deputy Accountant - December 22, 2011

The TSA IS REPLICA LAW ENFORCEMENT