Jan 15 (Reuters) - There is a material risk the United States would lose its triple-A if there is a repeat of 2011 wrangling over raising the country's self-imposed debt ceiling, rating firm Fitch said on Tuesday.

"If anything the pressure on the U.S. rating is increasing," Fitch's head of sovereign ratings David Riley said at a conference hosted by the firm.

"If we have a repeat of the August 2011 debt ceiling crisis we will place the U.S. rating under review. There will be a material risk of the U.S rating coming down," he added. 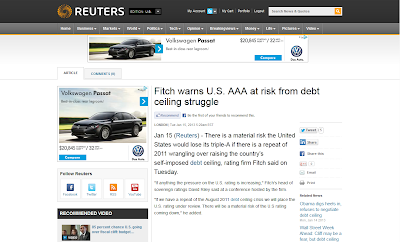 That's the news story, in its entirety, clearly implying that Fitch just wants the debt ceiling raised in order to avoid a downgrade. In other words, the Republicans should unconditionally surrender to Obama's demands.

Not quite. Here's what Reuters left out:


"In the absence of an agreed and credible medium-term deficit reduction plan that would be consistent with sustaining the economic recovery and restoring confidence in the long-run sustainability of U.S. public finances, the current negative outlook on the 'AAA' rating is likely to be resolved with a downgrade later this year even if another debt ceiling crisis is averted."

In other words, the exact opposite of Reuters' spin.

Is it any wonder the Democrats keep winning the PR battles with the MSM carrying their water like this?
By W.C. Varones - January 15, 2013

Exactly what was done to the Moody's reports! Frustrating.