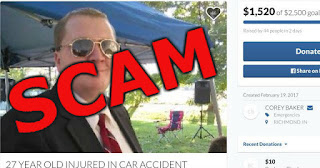 OK first of all let me say HIII WCV readers! Long time no talk to. Still fighting the good fight here in Richmond/DC, and yes I voted for Gary Johnson so don't give me any shit about this Trump crap. Now that we got that out of the way...

These days, I'm slaving away at GoFraudMe calling out GoFundMe scams and let me tell you, this shit is crazy. They steal photos from Google, they pretend to have cancer, they even make their own kids sick to put up GoFundMes. It's crazy. I get it, the economy is fucked but why are you doing this.

Today we need to talk about these threads at Democratic Underground. Some pondscum abortion-gone-wrong decided he was going to scam the democrats over there and boy did he! To the tune of nearly $2000 before he got busted. GoFundMe has since refunded about half of that, but the scammer's page still shows $847 in donations.

Dude said his brother was a longtime DU user and got in a car accident. OMG the horror. Except that never happened. And he was like SEND MONEY and DU users threw cash at him. This is the exact thing we libertarians talk about, a private safety net of generous people who will always help our own. If Negocios Loucos said he came down with cancer tomorrow I would be the first one to sell a kidney to pay for his treatment. If WC Varones was like "hey JDA, I have ass cancer and I'm dying" I would be like "I will sell my anus on the black market in Mexico so you can live, don't you worry bro." Without question.

This clown milked DU for all they were worth. "Wow! Amazing how some people take advantage of people,” read one post. “There are people who will take advantage of anyone or anything that is in trouble…I am not surprised. But it hit us here at DU..it was aimed at us.”