Matt Taibbi in Rolling Stone talks about the same thing we rail about so often here.

Why isn't Wall Street in jail?

[...] But a veritable mountain of evidence indicates that when it comes to Wall Street, the justice system not only sucks at punishing financial criminals, it has actually evolved into a highly effective mechanism for protecting financial criminals. This institutional reality has absolutely nothing to do with politics or ideology — it takes place no matter who's in office or which party's in power.

[...] You want to win elections, you bang on the jailable class. You build prisons and fill
them with people for selling dime bags and stealing CD players. But for stealing a billion dollars? For fraud that puts a million people into foreclosure? Pass. It's not a crime. Prison is too harsh. Get them to say they're sorry, and move on.

Oh, wait — let's not even make them say they're sorry. That's too mean; let's just give them a piece of paper with a government stamp on it, officially clearing them of the need to apologize, and make them pay a fine instead. But don't make them pay it out of their own pockets, and don't ask them to give back the money they stole. In fact, let them profit from their collective crimes, to the tune of a record $135 billion in pay and benefits last year. What's next? Taxpayer-funded massages for every Wall Street executive guilty of fraud? 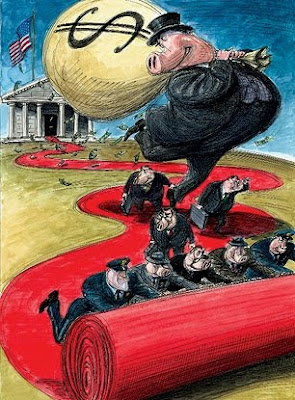 Taibbi is a lefty, but he absolutely gets this like few commentators anywhere on the political spectrum. His conclusion:

The mental stumbling block, for most Americans, is that financial crimes don't feel real; you don't see the culprits waving guns in liquor stores or dragging coeds into bushes. But these frauds are worse than common robberies. They're
crimes of intellectual choice, made by people who are already rich and who have every conceivable social advantage, acting on a simple, cynical calculation: Let's steal whatever we can, then dare the victims to find the juice to reclaim
their money through a captive bureaucracy. They're attacking the very definition of property — which, after all, depends in part on a legal system that defends everyone's claims of ownership equally. When that definition becomes
tenuous or conditional — when the state simply gives up on the notion of justice — this whole American Dream thing recedes even further from reality.

THANK YOU MATT! Don't forget the role of the universities who laid off thousands to justify losing their billions in precious donor endowments....how about this be your next story.......

"Guys...let us not forget that the Harvard Business School has produced in the last 20 years, the MBA-h1tmen who INVENTED globalization, layoffs, arbitrage, sub-prime mortgages, and a host of financial wrong-doings associated with improving the bottom line while DESTROYING the fabric of American (and world) economics".

"Harvard's pitiful faith in the ability of the national economy to recover--that the loss of endowment, endowment income cannot absorb enough to cover the salaries of 275 employees. Their position as the richest educational institution is hardly jeopardized...easy to sacrifice those whose salaries pale in the grand scheme of Harvard finances ...even with the loss of a third of its highest value, an embarrassment of riches which no other university comes close. Then again its Harvard MBAs who dominate Goldman-Sachs and helped engineer the financial disaster and Harvard MBAs who figured out rather quickly how to profit from it. And its Harvard MBAs who are absolutely clueless to the plights of the people who really work to keep the universities and America going, but always get the shaft when things go bad. The idiotic viewpoint of people like SATNAVSYS whose hero is the corporate criminal Chainssaw Jack Welch is exactly the mentality that Harvard produces".

If Robespierre were to ascend from hell and seek out today’s guillotine fodder, he might start with a list of those with three incriminating initials beside their names: MBA. The Masters of Business ...