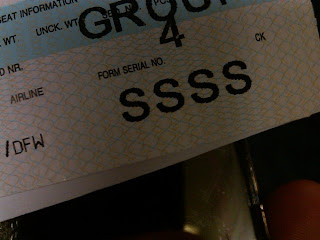 If you read my first entry on SFO to DFW here on WC Varones, you know I had absolutely no problems getting through TSA with a DMV printout (no photo) and a Costco card. Even better, my plane had WiFi so the story was up before I landed and dropped off the planet.

Fast-forward five days and I'm leaving DFW to return home to SFO. I'm not happy to report the return trip was not nearly as easy.

First of all, since my partner in crime (who got more *ahem* hassle than I on his way to DFW) and I were flying from different airlines, we had to go through different checkpoints and meet up after that. Lame.

Then I had to get past American Airlines. She politely checked my bag and talked to me about San Francisco while ripping up my pre-printed boarding pass and reprinting one with SSSS clearly written on the corner. That means I'm on "the List" forever or at the least flying as a "selectee" for the first time.

She smiled all the while and never mentioned it.

The SSSS is an asinine aviation security rule, of course, because if one were trying to get something into the airport that wasn't allowed, wouldn't one dump it as soon as they saw the SSSS on their boarding pass if they'd done their research and knew they were up for additional screening?

I'm cool, all I had was a laptop with a "Big Brother is Watching You" sticker and some questionable, um, "vacation" items that aren't necessarily contraband. I didn't even notice the SSSS until I was about to get on the plane, apparently TSA didn't either.

I rolled up to the elderly TSA gentleman (I'm being nice) and said "You're going to hate me," pulling out the DMV printout and began to explain that I was still waiting for my license that I went to California DMV for on 1/19/10. He immediately called for a supervisor.

Shit, I started with the jokes about the California budget crisis and how I probably won't see my license for 6 months. He didn't budge.

Thankfully for me and my no ID having ass, as he called a supervisor a second time, two McDonald's employees tried to roll through saying something about one of them being an escort and one working in the airport. Old dude was not buying it and I was trying my best not to pull out my BlackBerry and start making snarky TSA comments on Twitter. Keep in mind I'm wearing a kitty hat with ears and everything, how scary can I be?

The McDonald's chicks (I can pretty easily assume they were of Mexican origin) started saying they had no ID. None. Old dude didn't like this. Neither did the TSA supervisor who showed up, and went straight for the chicks. I'll save you the details, they denied them entry and snickered about calling immigration as it's illegal to get hired in the airport if one doesn't have ID blah blah blah. I of course said "isn't it a legal requirement to have ID?" with a straight face and my Costco card and every credit card in my wallet splayed out. I even had a W-2 just in case.

She let me go, said I was fine, and commenced to bitching about the McDonald's chicks with no ID at all. At least I had tax documents and credit cards, even if the names didn't match. Want a business card? Got that too. Two of them. I tell them thanks and Old Dude tells me you better take care of that as if I can solve the California budget crisis single-handedly and staff the DMV with enough driver's license makers so I get mine at last (to date it has been 4 weeks, I was told 2 - 3, the DMV 800# says it can take up to 6).

I was not subject to additional screening. Flying as a "selectee" is not nearly as cool as I thought it would be and to date I still have no idea what the air puffer is like. Lame x2, come on TSA, make it worth my time.

Then I had to take off my shoes.

The guy scanning baggage stopped and called another TSA guy over before my things popped out of the X-ray machine. "Am I in trouble?" He wanted to talk about my "aerosols", of which I had none so I knew it was the also seemingly Mexican guy in front of me. I grabbed my shoes and laptop and inappropriate "vacation" items and was done.

Does this mean I'm marked forever? Bring it, TSA, I'll be sure to keep my liquids under 3 oz and bring as many inappropriate but totally allowed "vacation" items as possible next time.

Sorry, I ratted you out. They gave me a junior job in the Geithner Treasury with an implicit promise of a transfer to a 7-figure Goldman job in 2 years.

Yes but do they pay you your bonus in US Treasurys? If so, you got ripped off and I think I already ratted *myself* out, sucker.

(Is Timmy hiring? I need cash for more plane tickets.)

that'll be enough of that anti-american, snarky wiseass bluster from *YOU*, buster!! eternal vigilance of all non-islamic/arabic looking/origin males between the ages of 15-40 is the price of FREEDOM, mr. teabagger government hater!

one more time: the security forces are our FRIENDS. they're only doing their job in what cleverly seems to be a completely random, totally incompetent manner to HELP us and confuse the enemy.

really, they're quite a lot like recon marines and navy SEALS: warrior heroes giving their all - except when they're on break - on the deadly dangerous front lines of the battle for freedom. ask them: they really believe that.

Couple of years ago I'm sitting in the gate area waiting to get on a plane to Miami watching the TSA guy searching a little old lady's suitcase when the airline agent came on the intercom and said something like "The following passengers have checked bags onto this flight but have not checked in themselves yet: Muhammad Salaam, Sadam Allah, Omar Kalil, etc. etc. please check in now" They never did check in. I rolled the dice and got on the plane, and am still alive to tell the tale, but during the whole flight I was expecting us to blow up in mid air at any moment. Maybe they got the bags off the plane after these guys didn't show up for the flight, maybe not. At least they made sure the little old lady wasn't up to anything nefarious.