Checking the facts the MSM won't: this weekend's outrageous Obama and Pelosi lies

It's a travesty that the bootlickers in the mainstream media are so reliable that Democrats are completely comfortable making outrageously dishonest statements and knowing they will never be called on them.

I'm not even paying attention to the news that much this weekend and I caught two whoppers.


We found out that a big mistake at one of our biggest banks resulted in a $2 billion loss [actually, it was $3 billion and counting, but let's not quibble]. While that bank can handle a loss of that size, other banks may not have been able to. And without Wall Street reform, we could have found ourselves with the taxpayers once again on the hook for Wall Street's mistakes.

Excuse me? J.P. Morgan lost billions in prop trading after Dodd-Frank and that's evidence that Dodd-Frank is working? What kind of psychotic logic is that? The problem in 2008 was that giant, Too Big To Fail banks were allowed to run with insane levels of leverage and threatened to destroy the the economy if they didn't get bailed out. None of that was fixed by Dodd-Frank. In fact, the TBTF banks have all grown even bigger since!

Why have the TBTF banks been allowed to get even bigger? Let's go to the tape: Obama 2008 campaign contributions. 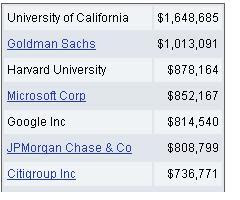 Funny how that works!

Let's also not forget that Obama picked for Treasury Secretary Timmy "the Tax Cheat" Geithner, who was head of the New York Fed, and responsible for regulating all the Wall Street banks when they made their over-leveraged bad bets and blew up. Failure deserves its rewards!

Last year, just the threat of not lifting the debt ceiling caused us to -- our credit rating to be lowered. This is not a responsible, mature, sensible place for us to go.

That is a blatant lie. Boehner folded and raised the debt ceiling with no real near-term cuts or a path to fiscal sustainability on August 2. Standard and Poor's downgraded the U.S. on August 5 because Boehner caved in, not because he had earlier held out. S&P's statement:

The downgrade reflects our opinion that the fiscal consolidation plan that Congress and the Administration recently agreed to falls short of what, in our view, would be necessary to stabilize the government’s medium-term debt dynamics.

The worst thing that Boehner could do now, from the rating agencies' (and any sane person's) perspective would be to cave in again and raise the debt ceiling without getting structural reform. The problem isn't the debt ceiling; it's the debt!
By W.C. Varones - May 20, 2012

W.C. thanks for another public service post. Interestingly, Obama has invested heavily with JP Morgan and has called CEO Jamie Dimon "one of the smartest bankers we got."

At this point it's like they are banking that nobody is paying attention.

Luckily the msm has a goldfish memory

BWHAHAHA Pelosi actually believes that too.