Cathedral City is near Palm Springs, an oasis in the desert east of California's Inland Empire, the #2 most depressing place in America.

And it was the last place three people saw yesterday. AP:


Three people were found shot to death in a Riverside County home and investigators suspect a double murder-suicide.

They discovered a woman and her adult daughter shot to death in a bed. In another bedroom, the body of the older woman's common-law husband was found with an apparent self-inflicted gunshot wound.

But lookie here.  The tax assessment jumped by $106,000 in 2007.  Because of California's Prop 13, you only get a jump like that if you make major improvements to the house.  It looks like these guys did a major remodel, likely funded with a home equity suckout.  That would have left them deeply underwater after the crash.

The only thing that outwardly distinguishes the home is the upgraded garage door, while the neighbors all retain the plain tract home garage doors. 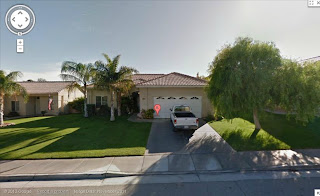 From the satellite view, it's clear they didn't add any square footage or a pool.

It looks like this double-murder-suicide came down to a broke man angry over not getting enough of his dying wife's assets.


Investigators say the woman had been recently diagnosed with a terminal illness, and her common-law husband was upset over her plans to divide her assets after her death.

The daughter was visiting from Florida to help put her mother's affairs in order.

Killing over the assets of the dying, murdering for the last scraps in a desperate America.  That's what the Greenspan-Bernanke Fed have brought us to.

UPDATE: That tax assessment increase may have been just this partial ownership transfer, where Honorata Jastrzebski stayed on the title but Stanislaw Mlodowski came off and Joanne Hasapes went on.  A new mortgage at inflated 2006 prices would be likely in that type of transaction.

Joanne Hasapes' LinkedIn profile puts her in Longwood, Florida, so she is likely the daughter victim.

And they get to blame "gunviolence"... Serial killers are so cleaver.

Joanne is the daughter, Stan was not a common law husband. He and Nora had lived together for a very long time but she never intended to ever marry him. Nora did bring Joanne home to set up her estate. Because she left everything to her children he got angry and killed everyone that night. Nora and Stan came from Poland, where they went through the war before coming to the U.S..I believe they met at a Polish Church in Los Angeles. Joanne, left a husband and three children. Stan was not a serial killer, he was also not a contributor to the income. . It was a shock when this happened because he was not a man that showed anger he was happy and jovial. Nora had 4 children only one is living. Her husband passed before she moved to the Palm Springs area. One son was hit by a semi while riding a bike in Cathedral City. Her younger son died after Nora and Joanne’s death, she has a daughter who survives them. Nora was a happy beautiful vivacious woman who worked hard and overcame many obstacles in her life. Joanne was beautiful, young with beautiful children and a devoted husband. The thought of Stan doing what he did never entered any of our families minds. This is a tragic event. And is not fodder, they were people with complex stories.