Boston Marathon bombers are from Chechnya; surviving terrorist is Dzhokhar A. Tsarnaev 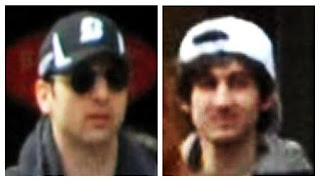 
The suspects in the Boston Marathon bombing were Chechen and had been living in the US for approximately one year, the AP reported Friday citing sources.

The surviving suspect has been identified by the AP’s source as Dzhokhar A. Tsarnaev, 19, of Cambridge, Mass, according to a Tweet by the news agency.

A second suspect was reported dead earlier Friday. Boston Police Commissioner Edward Davis confirmed the death of one of the suspects implicated in Monday's Boston Marathon bombing which left three dead and upwards of 176 via his Twitter account Friday, stating simply: "One suspect dead. One at large. Armed and dangerous. White hat suspect at large"

Dzhokhar Tsarnaev is listed in this 2011 news story as having won a scholarship for Cambridge-area high school students.

Chechnya is known for both separatist terrorism and its Muslim religion. You may recall the Beslan school massacre, perhaps the cruelest terrorist attack in history.

UPDATE: The dead one is Dzhokhar's brother Tamerlan Tsarnaev, an Islamist and amateur boxer.


Boston bomber Tamerlan Tsarnaev, 26, who has been killed last night in a shootout with police at Watertown, near Boston, was a boxer with a YouTube profile which carried controversial videos of Islamic preacher Feiz Mohammad.

Tamerlan reportedly shared on his YouTube profile some videos of Australian Muslim preacher Mohammad, of Lebanese origin. A former boxer, Mohammad gained made the headlines in 2005 for blaming women for being rape victims.

In 2007, the Australian Federal Police investigated whether 16 DVDs of Mohammed's sermons, called the Death Series, broke laws against sedition, racial vilification, and inciting violence and terrorism. He also featured in a British documentary called Undercover Mosque.