Or is it? Franky Nothaft, Chief Propagandist Economist for Freddie Mac shares a message of hope and cheer regarding the home buying landscape. Some claim it's propaganda but I disagree. All you need to hear is around 0:38: "...we expect this spring home buying season to be the best since 2007." And what happened to housing prices and the economy in general after 2007 Franky?

Fortunately Franky answers in the same video. He offers that in 2012 alone, according to the graph below presented in video, real estate added 1.5 trillion to net worth. And how much did it take away from net worth after 2007 Frank? Are we net positive or negative, or am I not smart enough to understand because I don't have an economics degree from an Ivy League school? Because according to your graph, if it's 2007 all over again, then this is probably not a great time to buy a house I can't afford anyway. 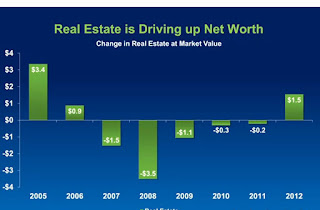 Watch for propoganda and humor purposes only.