UPDATE: This appears to be a clever hoax. It was actually on Twitter, but now removed. The time stamp is from 2012 and the user name is "Dzhokhar_". Someone figured out a way to hack twitter. The guy was reportedly tweeting while the boat standoff was going on, though I didn't get to see it. Nice work.

UPDATE: Dzhokhar tweets from the hospital:

WTF? I was supposed to get 72 virgins but I got a fat Jamaican nurse and a colostomy bag.

Obama has a new ally: 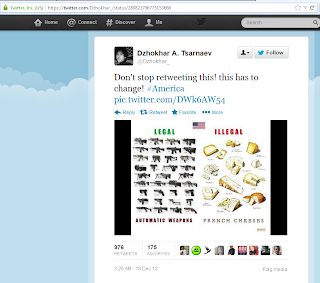 Interesting. Of course alleged terrorists can always get weapons and explosives.

wow and he's still tweeting as of 20 minutes ago...cops must have given him a laptop.

Don't be silly. You can tweet from a phone.