Bernanke on the "fiscal cliff" of allowing the Bush tax cuts, the Obama 99-week unemployment benefits, and the Obama Social Security Trust Fund-looting payroll tax cut all to expire on December 31:


Federal Reserve Chairman Ben Bernanke on Wednesday warned he won’t be able to save the economy if Congress takes the country over a “fiscal cliff."

The Fed chairman continued to sound the alarm about the "fiscal cliff" the nation is facing at the end of the year, when a slew of policy changes are set to take effect that could drain billions of dollars from the economy.

Yeah. Four years after the financial crisis is obviously waaaaay too soon to stop running Greece-sized deficits. Party on, Boehner!

For a more adult view of our nation's fiscal insanity, see Federal Budget in Pictures from Heritage.org. 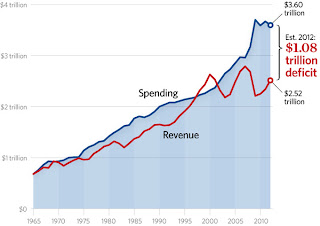