I got a call yesterday from a polling company on Prop 1A and the other measures on the May 19 California ballot. It came from the 925 area code, in the East San Francisco Bay Area. I'm still not sure whether it was a legitimate poll or a push-poll. It started off like a normal poll, but then got into a bunch of questions about "given that you're against these measures, how persuasive would you find this argument in favor of the measures?" They claimed that if I had been in favor of the propositions, they would have asked me about the persuasiveness of arguments against them (obviously, I have no way to know whether this is true). It wasn't as blatant as I've heard push-polls generally are, and it certainly wasn't persuasive.

In related news, this scary picture of Schwarzenegger shows that the syphilis has begun attacking his brain. 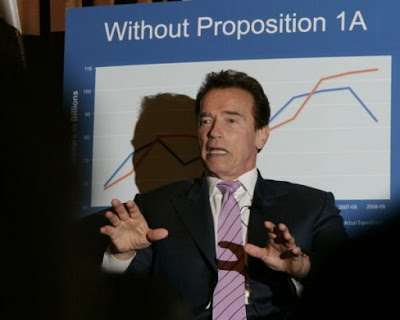 It's about time. The bastard deserves it.

UPDATE: I'm now fairly certain this was neither a legitimate poll nor a push-poll but a message-testing poll for the Yes on 1A side to figure out what spin would be most effective.
By W.C. Varones - March 28, 2009