When the Lamb opened the third seal, I heard the third living creature say, “Come!” I looked, and there before me was a black horse! Its rider was holding a pair of scales in his hand. Then I heard what sounded like a voice among the four living creatures, saying, “Two pounds of wheat for a day’s wages, and six pounds of barley for a day’s wages, and do not damage the oil and the wine!” - Revelation 6:5-6 (New International Version)

The third horseman rides a black horse and is generally understood as Famine. The horseman carries a pair of balances or weighing scales, indicating the way that bread would have been weighed during a famine. The indicated price of grain is about ten times normal, with an entire day's wages (a denarius) buying enough wheat for only one person, or enough of the less nutritious barley for three, so that workers would struggle to feed their families.

[...] the statement ["do not damage the oil and wine"] might also suggest a continuing abundance of luxuries for the wealthy while staples such as bread are scarce, though not totally depleted. 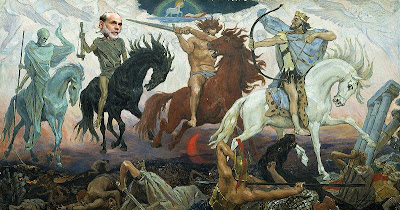 If that doesn't creep you out enough, I'm pretty sure the first horse is referring to the perpetual foreign war of the Bush-Obama global military empire:

I watched as the Lamb opened the first of the seven seals. Then I heard one of the four living creatures say in a voice like thunder, "Come and see!" I looked, and there before me was a white horse! Its rider held a bow, and he was given a crown, and he rode out as a conqueror bent on conquest. - Revelation 6:1-2 (New International Version)
And look! There's Obama on a white horse!
By W.C. Varones - July 18, 2011

You have to be careful with these interpretations of general statements. They are devised to teach wisdom not specifics so be precise in your context before pointing out the connection.