To coin a phrase: put-option ARMs

Things move fast these days. Not long after I wrote about Countrywide (CFC) and their pay-option ARM issues, rival Washington Mutual turned in an earnings report that showed a $122 million loss in the mortgage business. This caused analysts to rethink their views on Countrywide. Standard & Poors, for example:

S&P DOWNGRADES SHARES OF COUNTRYWIDE FINANCIAL TO SELL FROM HOLD (CFC 40.59**):We are concerned about CFC's credit exposure, as about 9% of production derives from subprime loans. Also, roughly 44% of loans held is comprised of riskier Option ARM loans. These loans have performed well up to now, but they haven't been stress tested, by design; we see such testing occuring sometime in '07.

Not that investor concerns are scaring Countrywide away from pushing pay-option ARMs: 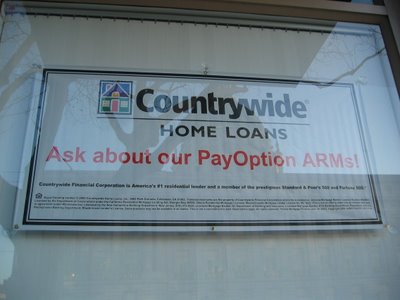 And now to coin a phrase: put-option ARMs. The mortgage industry calls them pay-option ARMs, because the buyer has the option to pay a full mortgage payment or a lot less. In reality, they are put-option ARMs, because the buyer is really getting a put option on the real estate market. If the market goes up, the buyer refinances or makes fully amortized payments on the loan. If the market goes down, the buyer makes minimal payments to live in a nice house for a period, and then hands the underwater house back to the lender. A no-lose proposition for the smart buyer!

Countrywide's prospects depend on its debtors being stupid: not refinancing in an up market, and not walking away in a down market. You can fool some of the people some of the time...
By W.C. Varones - January 18, 2007