If you've spent much time in San Francisco, you've probably run into this guy. 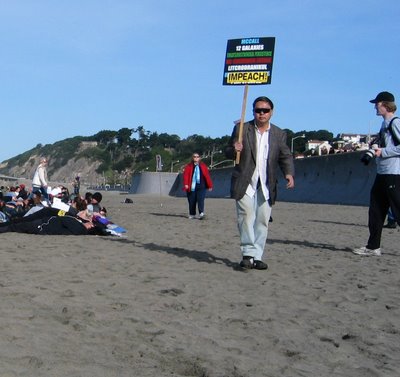 I first saw him in the late 90's, walking up and down Market Street in a business suit with a similar sign about impeaching Clinton and Bush. Lately, he favors more casual attire and music festivals and political gatherings.

Frank Chu (born March 24, 1960) is one of San Francisco’s best-known eccentrics. His protests against US Presidents, corporations, and the 12 Galaxies have been held in San Francisco and nearby locales since at least 1995. Chu has been compared to Joshua A. Norton, an earlier famous San Francisco eccentric.

Chu lives in Oakland, California and commutes daily to San Francisco where he can find the largest audience of passers-by and television news crews to share his thoughts with. He supports himself through a combination of state aid, sign sponsorships and small donations from his supporters.

From his beginnings as a young desperado...

In early 1985, Chu, then 24 years old, took 11 members of his family hostage in his home in Oakland and was reported to have been beating some with his fists. Chu fired a .38 pistol at one police officer who came to investigate, but missed. Police cordoned off a ten-block area for three hours. Chu eventually released his hostages and surrendered to the police. He says that he was acting in self-defense.

... to crusading exposer of intergalactic conspiracies:

Frank Chu holds Bill Clinton responsible for directing the CIA to withhold payment to him for being the star of something called "The Richest Family" during the presidency of George H.W. Bush. His protests frequently called for the impeachment of Clinton even after Clinton was no longer in office. Bill Clinton and various other US presidents are frequently accused by Chu of cooperating with the 12 Galaxies to commit crimes and treasons. Chu is strongly interested in television reporters and newscasters, who will bring him the publicity he requires to inform the world of the injustices committed against him. He hopes that this wave of publicity will cause a public outcry, which will result in the impeachment of various US presidents and the awarding of "$20 billions" in compensation for the damages he and his family have suffered. Another source says:

Frank believes that he and his family have been filmed for years now without their knowledge and the show has aired as "The Richest Family". He found out that he was a star (and appeared on the cover of Newsweek, Time, etc.) because California Correctional Officers who were really movie stars who were really KGB agents told him---through ESP. In fact, nearly all the movie stars have ESP. Frank is not from another galaxy and never contends to be. He hasn't even visited them. He is aware of them (possibly) through ESP being sent to him by Soviet ex-presidents (alive and dead/resurrected) and KGB agents. Clinton, Hillary, and even Chelsea are "guiltied" of being in collusion with the first 12 galaxies away from our galaxy, while Frank is being aided by the Zegnotronic (120 galaxies away).

Frank Chu is a local hero, and has local watering hole 12 Galaxies named in his honor.