Today's episode of Greenspan's Body Count comes from the Inland Empire, a.k.a. the Armpit of California, a region of heinous sprawl built in the desert east of Los Angeles so that people could spend hours commuting to their jobs.

Kelle Lee Jarka was lured into a mortgage he couldn't afford by the promise of skyrocketing home prices. When the bubble popped, so did his wife's head:

County records show Kelle Jarka was notified between February and June that his Tamarisk Street house was going into foreclosure and he owed the state nearly $30,000 in taxes and fees.

In early April, he bought life insurance policies worth more than $1 million on his wife, Isabelle, according to Murrieta police. She was bludgeoned to death a few weeks later, on April 28, in the master bedroom with her infant son nearby, police say.

Jarka's attorney, Mark Johnson, said money problems were nothing new for the Jarkas, and it certainly was not the reason for Isabelle Jarka's demise.

"They had been living on the edge financially for years," Johnson said. "I just don't think this was a murder for financial gain."

The Jarkas lived beyond their means, Johnson said. The couple had an expensive boat, a nice house and many creature comforts.

Living beyond their means? Whoever would have encouraged that? 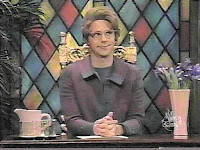 Who could it be? I just don't know. Could it be... GREENSPAN?