It's all Nixon's fault

Back in April, I pointed out on the Ritholtz blog that commodity prices went haywire right when Nixon closed the gold window in 1971, and have been highly volatile ever since. 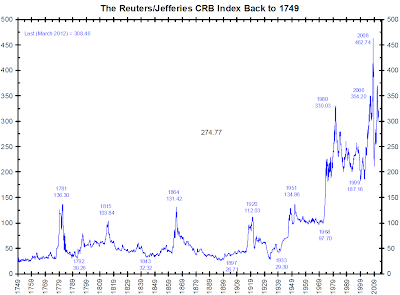 Now comes John Aziz of Azizonomics (via ZeroHedge) with an even more stunning chart of the fallout from Nixon's fateful move. Look how well wage growth tracked productivity growth until... 1971! And since then the middle class has fallen farther and farther behind as labor takes a smaller and smaller piece of the economic pie. 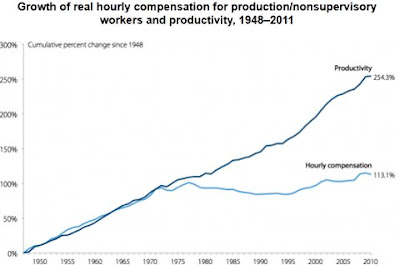 Well, my intuition says one thing — the change in trajectory correlates very precisely with the end of the Bretton Woods system. My intuition says that that event was a seismic shift for wages, for gold, for oil, for trade. The data seems to support that — the end of the Bretton Woods system correlates beautifully to a rise in income inequality, a downward shift in total factor productivity, a huge upward swing in credit creation, the beginning of financialisation, the beginning of a new stage in globalisation, and a myriad of other things.

What happened in the late 70s and early 80s was a blip caused by the (very real) drop-off in American [oil] reserves, and the (in my view, psychological — considering that global proven oil reserves continue to rise to the present day) drop-off in global production.

But while oil production recovered and prices fell, wages continued to stagnate. This suggests very strongly to me that the long-term issue was not an oil shock, but the fundamental change in the nature of the global trade system and the nature of money that took place in 1971 when Richard Nixon ended Bretton Woods.

Nixon, and his demon spawn Greenspan and Bernanke, not only sparked easy-money-fueled insane levels of leverage leading to a series of sequentially greater and greater bubbles and crashes; there is also damning circumstantial evidence that they are responsible for the destruction of the middle class itself!
I'd be very interested to hear your thoughts on the transmission mechanism for this phenomenon. Could it just be that inflation and easy money make capital investment more attractive than hiring?
By W.C. Varones - July 19, 2012