Christiano Ronaldo is likely to go down as one of the greatest soccer players ever. The guy is a fantastic footballer. He plays for Real Madrid and makes about 30 million a year. Oh and he’s also very good looking and has everything going for him. YET:

"I am sad and the club knows it, that's why I didn't celebrate the goals," said Ronaldo, who also scored two goals during the two-legged Supercopa triumph over Barcelona. "The appropriate people inside the club know why I'm sad. I won't say anything more."

The poor dear apparently isn’t making enough money. The interesting thing about Real Madrid is that it’s a state subsidized team. They get deals from the City of Madrid that shhhhh, don't talk about it in public, or at least until you get to Barcelona. Now Spain is on the verge of collapse and Chrissy here is sad because he isn’t making enough.

It just seems that the 0.1% are clueless about the plight of the dirty masses. Or maybe not; "let them eat cake" as they say. 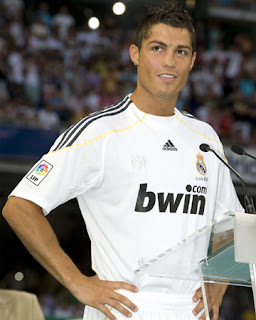