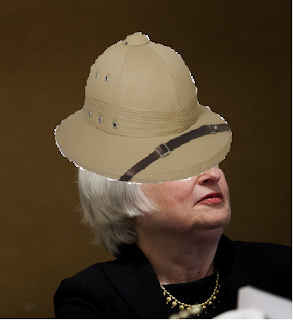 Today, facing a very contentious confirmation hearing, Obama's thug pick for Federal Reserve Chairman, Larry Summers, withdrew from consideration. Fresh off rejection by the American public and Congress over his Syria military adventure plans, and having been rolled by Vladimir Putin and Bashar Assad, Obama didn't have any more fight left in him. Janet Yellen, while not yet officially nominated, is the candidate of least resistance to both the pundit class and to liberals in the Senate.

While Yellen is a money-printing maniac in the mold of Bernanke, she's actually a welcome alternative to the bullying, lawless Summers. The legendary Jr. Deputy Accountant returns from a long blog hiatus to tell us why. And Jefferies economist David Zervos wrote two weeks ago, Summers is the ultimate market-manipulating, central-planning, crony capitalist bailout thug:


Larry was one of the key architects of the auto sector bailout and the TARP bailout in 2008-09. He was also on record suggesting that letting Lehman Brothers go bankrupt would be a "grave" mistake - instead he preferred a bailout. He pushed for a full government takeover of FNM and FRE well before the actual takeover - again a bailout. And going back in time, he was a key player in the Mexican debt bailout (aka the GS bailout) of 1994. Finally, throughout the late '90s Larry was a member of the "Committee to Save the World" - a troika that utilized bailouts, backstops, and safeguards as part of the heavy-handed arsenal of government intrusion into the private sector, which stopped market forces from finding occasionally uncomfortable equilibria. The crown jewel of the CSW's tireless work was to architect/muscle a $3.5b "private sector" plan to backstop losses from LTCM - another bailout!

So good riddance to Larry Summers.   Summers would have brought a dangerous concentration of economic power to the White House.  He would have unified monetary (money-printing) and fiscal (crony capitalist bailouts) policy for the Obama regime.  Yellen will still have Obama's back for as much debt monetization as he needs, but she won't be making bailout calls from the West Wing.

But isn't it funny that four years after incessant talk of a Fed "exit strategy," Bernanke's female doppelganger inherits a Fed that not only hasn't exited, but is still going in deeper every day!
By W.C. Varones - September 15, 2013