Was that an attempted reprise of The War of the Worlds? 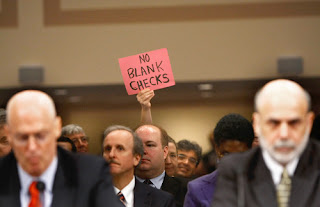 Front page of Chicago Tribune showed a picture of Ben and Hank at the Senate Interrogation Table. A man between and behind them in the audience was holding up a sign that said simply, "No Blank Checks" [A possible Negocious sighting?]. Yes, some people think they are putting on a panic-inciting-show for us. So I say, if this really IS a show, an Orson Welles-ian, as well as an Orwellian show they're trying to give us, then why are they sitting down at that table? Maybe at their next testimony, someone should bring a sign that echos the wise words of Biden from a couple of weeks ago; "Hey Paulson, Stand up so the crowd can see you!" 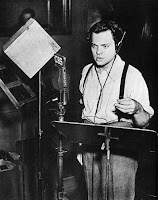 Here we see Orson Welles taking an opportunity to quote Paulson, oddly enough. Mr. Welles comments on the matter of the green-lazer-shooting-invaders, saying "If that situation were to persist, it would threaten all parts of our economy."