We've been seeing signs of this for some time (Tipping Point, 12/24/07 and Look out below!, 2/15/2007). This has obviously taken far longer than we expected to play out. I attribute that to China's illiquid portfolio conundrum. China knows that American Treasuries and the dollar are garbage, but as the biggest holder, it can't dump them without destroying the value of its holdings, and at the same time destroying the ability of the American consumer to purchase Chinese exports.

Over the past couple years it appears China has been diversifying away from the dollar into other currencies, commodities, and equities, but not actually dumping Treasury debt. The problem now is that Obama's deficits are so much bigger than prior years (and the off-budget bank bailout guarantees and Social Security and Medicare liabilities are so huge) that we need someone to step up and buy a whole lot more of our debt. That's apparently not going to be China.

Hence Helicopter Ben's plan for the Fed to print money to buy Treasury debt. That worked for a couple weeks. Note the sharp drop in 10-year Treasury rates in mid-march as HB revealed his dastardly plan: 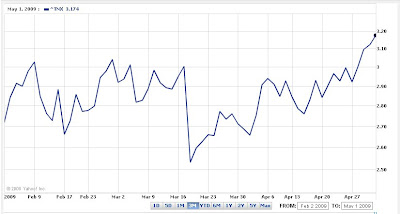 Yes, he shocked the bond market for a couple weeks into believing in cold fusion: Treasury can borrow and spend as much as it wants without causing higher interest rates because the Fed can just print as much money as it needs to buy all the Treasury debt. I'm sure that theory would make an award-winning paper at Bernanke's Princeton economics department, but in the real world, it doesn't work like that. Please see Zimbabwe and Weimar Germany.

So, yes, we still do need real buyers of our debt. You'll notice in the above chart that Bernanke's cold fusion only fooled the bond market for a couple weeks. Bond yields are now higher than they were before Bernanke announced his plan.

Our fiscal and monetary policy are the equivalent of children playing with matches around a gasoline can. China is the guy walking past who the kids ask for $100 to go get some more matches and gasoline. Trust us, we're good for it.
By W.C. Varones - May 03, 2009