LA Times has it all covered

Don't mind that the LA Times failed to cover the new poll which looks very bad for the Times-endorsed Prop 1A.

They are using their vast resources wisely to cover the many issues of interest to residents of L.A., California, and the nation. A screen shot, for example, of the wide variety of crucial issues being covered today by its columnists: 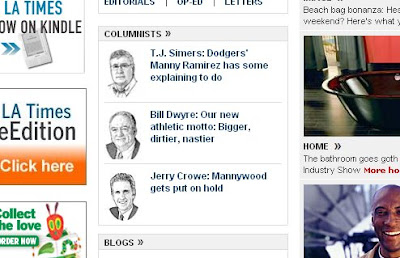 There was another column in the Times today which apparently didn't merit front page promotion. James Rainey on the plight of the newspaper industry. A less kind blogger might make a snide comment at this point.
By W.C. Varones - May 08, 2009