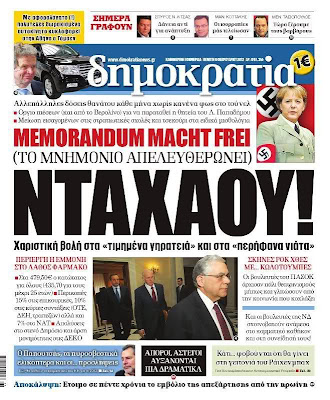 "The EU was set up in the aftermath of World War Two to bring peace, stability and prosperity to Europe."
- Europa.eu, official web site of the European Union.

How's that workin' out for ya?

UPDATE: The inspiration for the headline appears to come from this letter by Νίκος Ελευθερόγλου. Here's the Google Translation:

While the Troika with the Memorandum of 2 Greek Dachau, the political leaders took seven hours and 40 minutes Turn off write a text which, if implemented as described, gives the coup de grace "honored old age" and "proud youth" .

The meeting of political leaders, who had been postponed twice, started yesterday afternoon with several hours delay in the morning after the three leaders got their hands on the "bomb" of the new MoU.

The philosophy of the memorandum macht frei (Memorandum of releases), which provides for successive monthly installments of death, no light in the tunnel, climate and created an explosive chain reactions. The President of ND Antonis Samaras insisted on positions both in terms of supplementary pensions and the minimum wage and the need for measures that are not cyclonic, while President George Karatzaferis LAOS insisted on getting assurances that measures would be way out and will not take another , and take a stand by the Court, the Legal Council of State and the Bank of Greece. As for George Papandreou, behaved like that at the end of the meeting to the leaders got into the television frame of statements to be made at the end of Lucas Papademos, to symbolize the unity!

At the same time, the Troika, to press their leaders to close the painful agreement, announced that the Eurogroup would meet at 7 pm.

At the same time, both within Greece and from Berlin was given ... line to extend the term of Lucas Papademos to implement the requirements of the troika. As for the ... right hand of Mr. Papademos, Minister of State George Stavropoulos, threatened with specialized courts politicians. In the House, parliamentary groups living in their own drama. Members of ND tightrope walker between party duty and conscience, while PASOK MPs continue ... theater to avoid the wrath of society.

If the day looks good in the morning, then receipt of the Memorandum 2 fifty pages in English who arrived confirmed that the day would be very bad. Especially when they found that other saying the other in English and Greek texts, especially the issue of the 13th and 14th salary, the phones lit, so soon removed this paragraph. Information indicates that the English version was labeled with the following three heads: "Having taken into account, I will support the measures proposed and will pursue policies counter to them." This labeling is not in the Greek text, which raised eyebrows.

Originally the meeting of heads moved from noon to late afternoon. And because George Karatzaferis threatened to leave if not taken in the text translated from the Greek foreign ministry. Eventually the problem was solved and the leaders began their meeting at the Maximos Mansion on a very heavy atmosphere. The first great tension created on the issue of supplementary. There, the president of Democracy Antonis Samaras insisted on the ceiling of 300 euros. The result was to stop the meeting and need to contact Mr. Papademos with Olli Rehn (Committee on Finance) and Jean-Claude Juncker (head of the Eurogroup).

Second stop was just before midnight, after the claim of Mr. Karatzaferis to have assurances that the new Memorandum is authorized by the Court, the Legal Council of State and the Bank of Greece. Finally, half an hour after midnight, went out of Maximus as usual the first President of LAOS Karatzaferis, who said that he regrets not refuse if he was asked, would say no again. And yet that in the not-right-in throughout his life. Indeed, later said that he agrees to what others decide right because he wanted more time, and still remains hazy whether the government.

Around one a.m. at the door of the Hall Maximus passed the Troika, a new round of talks.