I hate to beat up on Jeremy Grantham. The dude's a legend, and he's triumphed through a lot of market cycles.

And his latest quarterly letter is awesome. I can even overlook the part where he slanders libertarians by lumping them in with leveraged Wall Street bailout-junkies. Perhaps he hasn't spoken to enough libertarians to understand that Too Big To Fail is not part of the program. And click on over and see what he has to say about bonds... it's exactly what we've been saying here for some time.


The interesting overpricing that exists in global markets is in debt markets – those that are seen to be lower risk than the rest (e.g., most developed market government bonds ex the usual suspects: Greece, Portugal, Spain, and Italy). In some markets like the U.S. and the U.K., the long bonds can be so murdered by inflation that holders should end up concerned about return of capital and forget about being paid for the risk. On the plus side, if economies collapse, the bonds with some duration may protect your money in the short term. This is a trade-off between possible short-term safety against probable long-term risk and negative return.

So in asset allocation there is one great opportunity – avoiding duration in fixed income – and one pretty good opportunity – down weighting most of the U.S. market. Not such a bad opportunity set, really.


But this act of data malpractice cannot stand.

Grantham uses data since 1919 to show that stocks are a better hedge against inflation than gold is. The problem with that? The dollar was pegged to gold during most of that time. Using the history of a gold-pegged dollar to forecast what will happen in a pure fiat regime is absurd! 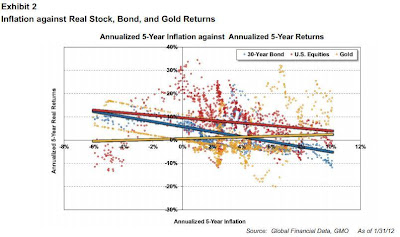 And here's what gold and stocks have done in the fiat currency era. 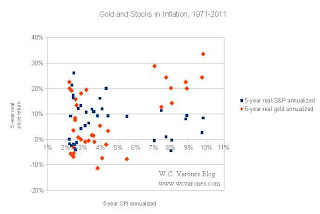 A few caveats: that's price return for the S&P, so you can add a few percent for dividends, but it doesn't change the picture much. And of course the CPI has been through a number of contortions which have tended to further understate inflation over time. But the story remains the same: gold rocks in inflationary environments.

And when does gold suffer? Those big negatives were during the reign of Fed chairman Paul Volcker, when he jacked the Fed Funds rate up to double digits. How likely is that to happen again? Answer: because we've allowed the national debt to balloon to $15 trillion, 100% of GDP, double-digit interest rates would instantly bankrupt the United States. We couldn't service the interest on the debt. So don't expect another Volcker to come riding to gold bears' rescue.
By W.C. Varones - February 27, 2012

I can't believe I actually followed that. I never thought about the issue of double diget inflation relative to gold in than fashion.

Gold doesn't produce cashflow that you can measure. You're just hoping that a greater fear comes along to propel it higher.

Last year consumer staples stocks outperformed gold (I forgot the exact numbers buy it was by about 5%).

Cashflow. It's not sexy but it will keep you out of bubbles. The story for gold is perfect right now. Perfect stories usually end sadly.

Consumer staples did indeed outperform gold in the calendar year 2011, but gold has since passed them by.

Cash flow is getting harder and harder to find in Zimbabwe Ben's ZIRP World, and paying crazy multiples for tiny cash flow is not a way to avoid bubbles.

Most of the stocks in the XLP Consumer Staples ETF have P/E multiples of 17-20 on top of what many argue are peak profit margins. Dividend yield is less than 3%. I'd take that over Treasuries, but it's hardly screaming cash flow.

Well... there is no multiple for gold. Historically, consumer staples trade at a premium to stocks. That premium stretchs up to 40x at times, so 17-20 ain't bad.

Gold is a crowded trade. Yahoo now quotes gold on the front page of yahoo finance. It didn't do that a decade ago (a good time to buy).

Personally, I don't know anyone who isn't a gold bug nowadays. The story for owning gold is absolutely perfect.

Like you said, You're just hoping more people will buy gold and that you'll time your sale perfectly. I hope more people sell Walmart because there won't be any Walmart shares left in 18 years at the current rate of their buyback. Meanwhile, I get paid.

You're preaching to the choir on dividends. I love dividend stocks, including WMT since 2006 at $46.

I've got far more in equities than in gold, but dogmatically zero-weighting gold because you are adamant about cash flows is hazardous to your financial health.

And if zero cash flows are a no-go, you should have zero cash and zero Treasuries as they have NEGATIVE real after-tax cash flows.

Is gold a bubble?