The Truth Behind the Dirty Fed's Dirty Laundry 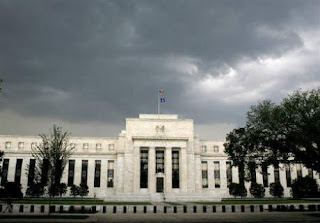 The Fed has been forced to open its books and reveal recipients of "emergency" loans at the height of the 2008 financial collapse. Unsurprisingly, the news ain't pretty. Read about $3.1 trillion loaned to Goldman Sachs, Merrill Lynch, Morgan Stanley and Citigroup, unsecured loans for McDonald's, Verizon and Harley-Davidson, plus over $550 billion in MBSs handed over to foreign banks to "save the American economy".

WCV:
Something is very wrong here. The Fed's balance sheet is $2.2 trillion. How could it loan the Vampire Squid $3.3 trillion? I'd like to see what is in the $3.3 trillion number. It can't be right. I suspect the author of the $3.3 trillion amount confused "stocks and flows".

When I have some time, I am going to dig through the data with a calculator and see what happens. Fun!

Now let me ask you this, was UBS or Credit Suisse on that bailout list? And if so you'd THINK that the Swiss would be grateful enough that the US Taxpayer is bailing out their banks that they'd award us the World Cup in 2022. But NOOOOOooooo, the World Cup will be played in might Qatar with it's 1.6 million people, 1 major city and an average temperature of 106 during the month of June. WTF?

We're all counting on finance brains like yours to translate the FED bookkeeping into something us normal folk can understand. We small that it's a giant heap of crap, but my head spins with the terminology and vehicles. I assume that is what they count on.

Junior:
This is what I think happened. The Fed lent GS say $15 billion overnight. GS repaid the $15 billion. The Fed repeated this say 220 times, hence $3.3 trillion. At 12/31/09 GS's total footings were $849 billion. How could even PriceWaterhouse hide $3.3 trillion in that?
This is why I think the reporters confused stocks with flows.
Your point about the Fed's unusual accounting practices is well taken. But remember, the Fed is audited by D&T, a Big 87654 firm. So?

You are correct that the massive $3,000,000,000,000 number is actually just the same couple billion or hundred billion going back and forth from the Dirty Fed to Goldman, Citi, et al. Perhaps the Christian Science Monitor reporter got a bit confused or made it over-simplified but the point here was that Zimbabwe Ben promised $9 trillion to the economy as lender of last resort (albeit w/ collateral, allegedly, and albeit this money was paid back but what if it hadn't been?), on our behalf, without our permission and then refused to tell us just how much he handed out.

As of last year (I haven't looked at the OCC report lately), Goldman had $47 trillion in derivatives exposure. You don't see PwC having to hide that, do you?

What "counts"? Why do accountants have jobs?

And we're back to arguing that an "audit" performed on an entity that provides its own financial accounting manual is more futile than even regular audits.