CBO morons predict three consecutive years of phenomenal growth bigger than the housing bubble, no recession for a decade 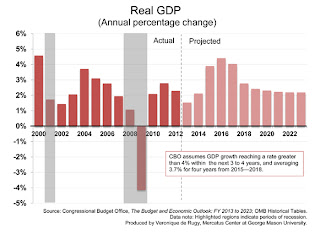 The CBO is a bunch of myopic clueless geeks with models that have absolutely no relation to the real world -- and they are likely under political pressure to be optimistic too.

In 2010, the CBO estimated that the 2013 deficit would be less than 3% of GDP in its "baseline" (aka "current law") scenario which assumed the expiration of all of the Bush tax cuts, the AMT fix, the payroll tax holiday, and the Medicare doc fix.

Now you don't have to be a Keynesian psychopath to understand that large tax increase on the middle class in addition to cutting off people's unemployment checks would have a significant impact on GDP. That is accepted by all economists across the political spectrum. Except, apparently, the model monkeys at the CBO.

In fact, the deficit is running around 6% of GDP this year [UPDATE: It came in at 4.1% thanks to a booming stock market, low interest rates, $78 billion in interest remittances from the Federal Reserve's debt monetization program, and a change in the definition of GDP] even though some of the "baseline" assumptions were eventually adopted (Bush tax cuts for the rich and payroll tax holiday ended at the end of last year). All of the "baseline" tax increases and spending cuts -- including both the extended and the expired -- amounted to only 2% of GDP, so even given the ludicrous stipulation that large middle-class tax hikes have no impact on GDP, the CBO was still way too optimistic.

To be fair, there's no reason to predict a recession when the middle-class (do they still exist?) economy has been in recession since 2001 as shown by median wage "growth" and the employment to population ratio.

To be nonpartisan, the CBO generally is given the assumptions in which to review items. I am sure they did similarly bad estimates on ObamaCare and countless other items.

Think of the CBO as the nerd being told to write a book review for a biased teacher.

The worst example I can think of was not the CBO, but the CRS (congressional research service) who reported in 2007 or 2008 on the definition of "Natural Born Citizen." The report stopped all debate by politicians and gave ammunition against people reading Supreme Court decisions. If memory serves, the CRS even incorrectly stated the origin, reasoning and meaning of why that term was used and confused it with "Native Born." It was a report that undermined the U.S. Constitution by exploiting the staffers in Washington through misinformation.

However it was considered non-partison because it supported both McCain and Obama in their presidential bids.