Once in a while, you get shown the light 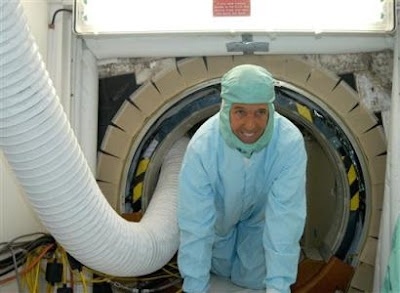 whom I loathed and would later show to be the world's biggest douchebag.

My reasoning was that Bush was botching the execution of the Iraq War, and that a Euroweenie like John Kerry might kiss the ass of the corrupt and incompetent U.N. and get them to start helping to stabilize Iraq.

I doubt that would have happened. But a vote against Bush looks pretty good in hindsight, doesn't it? As mocked as Bush is for foreign policy, it's his domestic policy that will ensure that he goes down as the worst President in history. A year ago, it looked like the worst thing Bush would do was Medicare Part D, the greatest expansion of entitlements in decades, which alone was enough to threaten the ability of future governments to meet their obligations. Since then, though, Bush has done so much destruction that Medicare Part D looks like a footnote.

Bush has nationalized the entire U.S. financial sector. If someone had predicted that four years, two years, or even one year ago, you would have thought he was crazy. And Bush has set the automakers on the path to nationalization, a course that will not be reversed unless Obama rips off his mask to expose the ghost of Milton Friedman underneath.

In a shockingly short time span, Bush has destroyed the U.S. free market system that served us so well for hundreds of years, and imposed European-style socialism. At this point, being like Europe is at the optimistic end of the spectrum of possible outcomes. With the staggering debt Bush has piled up, complete collapse of the dollar and/or the government are looking like real possibilities.
By W.C. Varones - December 21, 2008