Senior Chinese leaders have privately voiced fear over the soaring US budget deficit and are increasingly looking to diversify from the dollar, a US congressman said on Monday.

'We heard across the board - in private - substantial, continuing and rising concern,' Representative Mark Kirk said after a trip to China that included talks with senior officials and central bank chief Zhou Xiaochuan.

'It's clear that China would like to diversify from its dollar investments,' the Republican lawmaker said at the Centre for Strategic and International Studies, a Washington think-tank.

You mean this soaring US budget deficit? 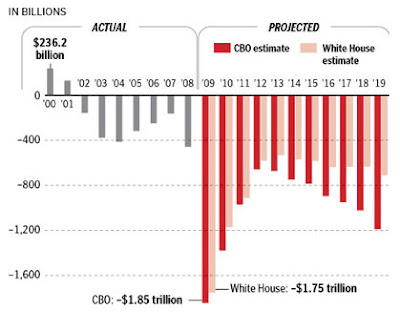 Whoever should we blame for that?

The United States has been running large budget shortfalls since the tenure of president George W. Bush.

Yes, I look at that graph above, and I just think, "George W. Bush, what a maniac!"

AFP neglected to mention the unnamed President responsible for quadrupling the deficit in a single year. Someone named "Obama" was mentioned tangentially twice in the story, but not relating to anything regarding deficits.
By W.C. Varones - June 08, 2009